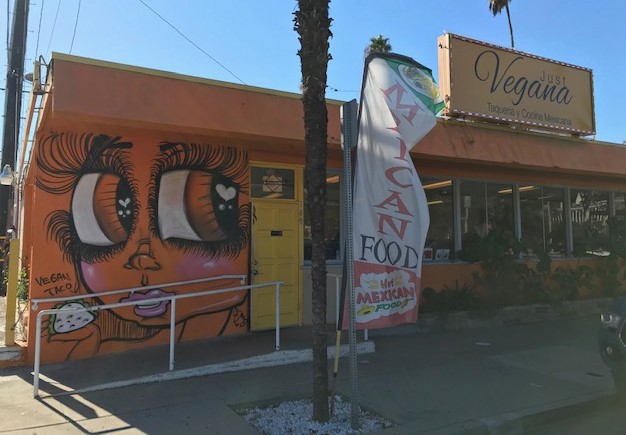 In the former Sabor Mexicano spot across from City Hall, Just Vegana is part of the vegan-Mexican trend. In fact the restaurant is about four blocks from Borreguitas, another vegan-Mex spot previously featured here. Something is afoot, and it’s plant-based.

I met an out-of-town friend here for breakfast recently. Except that since it was a weekday, Vegana doesn’t serve breakfast, just an early lunch. They only have breakfast on weekends. 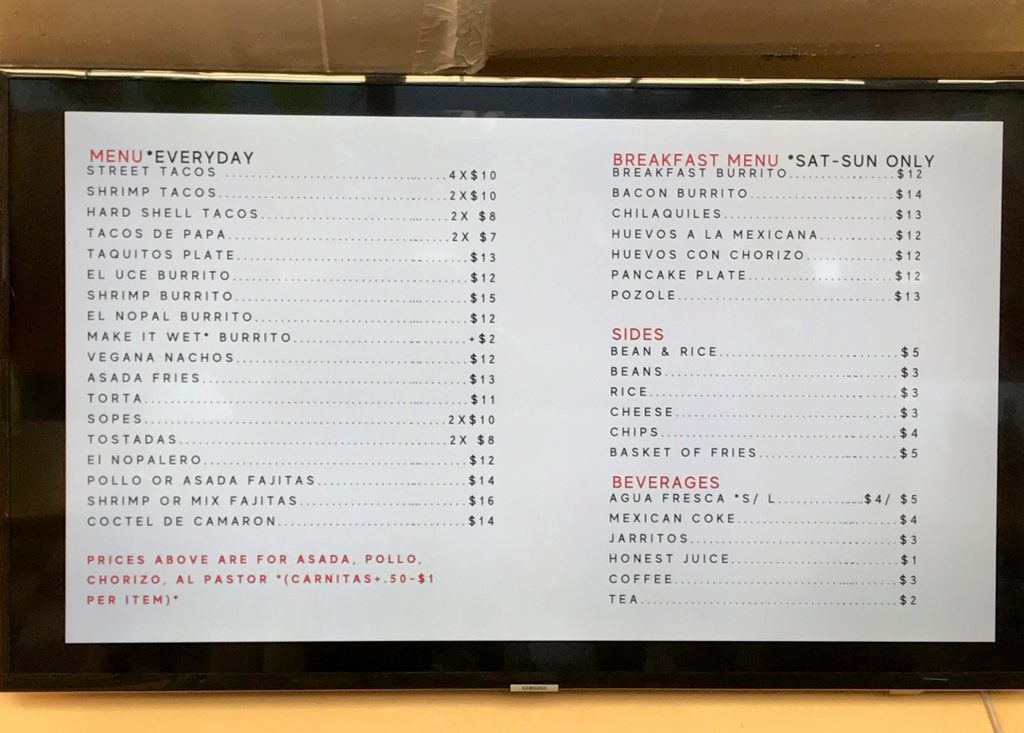 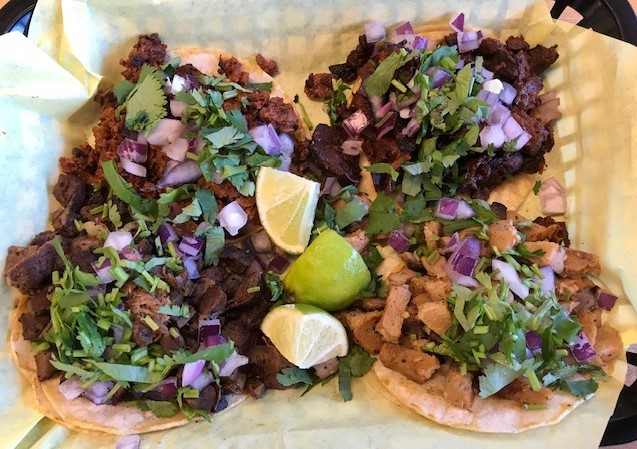 He was impressed, and he’s an omnivore. He said the chicken was right, the asada a bit salty, the pastor a bit sweet, and the chorizo “really, really good. It’s got that grease. It’s amazing.” Overall, his verdict was “awesome.” As you can see, they didn’t skimp on the faux meat. It looks like eight tacos’ worth of fillings. 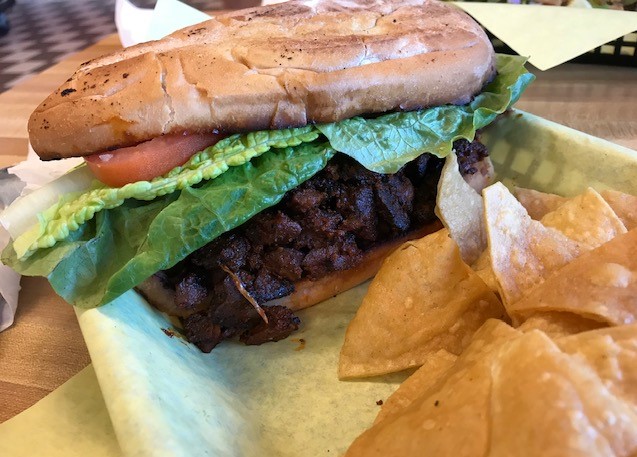 I polished off my torta. Taste- and texture-wise, I never feel like vegan meat is the same as the real thing, but I can appreciate it. Also, the bread was great. My agua fresca — guanabana flavor — was refreshing. There’s a salsa bar too.

Kind of amazing that vegan Mexican in Pomona isn’t simply an option itself, but that diners have several options for where to get it. 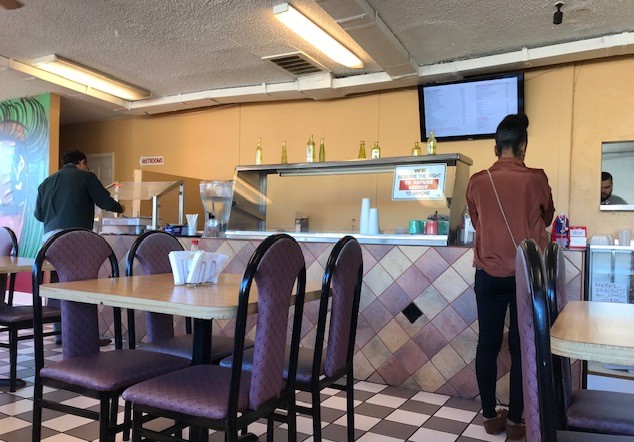 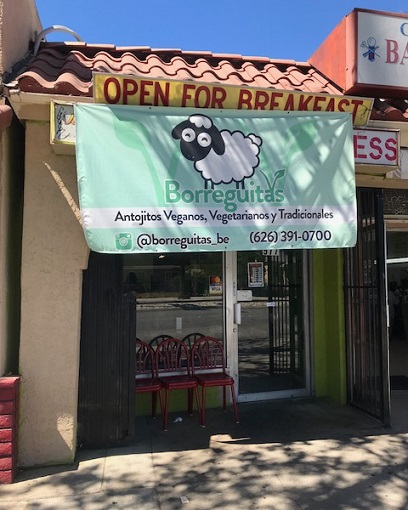 This is a rarity, a vegan restaurant, and in a smaller subset, vegan Mexican. A vegan friend who lives nearby had eaten at Borreguitas several times since its July opening and invited me and two other friends to lunch.

Seating about a dozen, it’s a small place, sandwiched (possibly with sprouts) between a barbershop and La Fuente, a 24-hour Mexican restaurant. The story is that there’s an ownership connection with La Fuente, where vegan items were introduced and ignored because nobody really knew about it. Borreguitas, however, seems to be a hit. In the two hours we were there, people kept cycling through or picking up to-go orders. 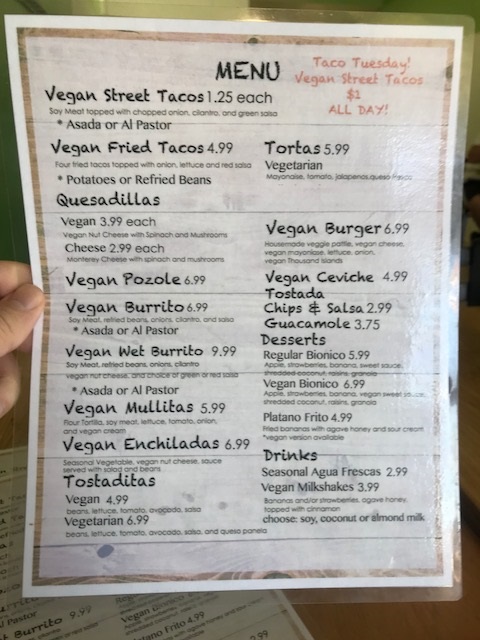 The menu has tacos, burritos, quesadillas, mulitas, enchiladas, tortas, pozole and ceviche, all Mexican staples, only with soy meat, vegan nut cheese and the like.

Of our group of four, three got the “asada” burrito with either red or green salsa ($10). I photographed the green. You can imagine the red, I trust.

“This is magnificent,” one carnivore declared. “This sauce is fantastic.” (He had the red. Maybe I should have photographed it instead.) “This was the best vegan burrito I’ve ever had. Also the first,” he clarified. “But it won’t be the last. I’ll be back.” 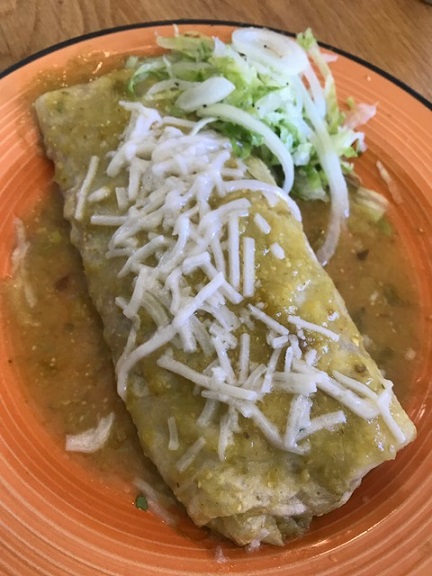 The second carnivore also liked his burrito and said, “I will gladly take my meat-loving friends here.” He had earlier joked: “My comment is, ‘Add a little meat and: delish.’ You don’t need to put that.” I didn’t need to, but I try to go above and beyond.

Of course the vegan liked it. She’d had it before.

I had the street tacos, four of ’em ($1.25 each): two “asada,” two “al pastor.” They looked much like the real thing, dusted with cilantro and chopped onion, the asada looking steak-ish, the al pastor ruddy, with (a nice touch of authenticity) thin-sliced pineapple on top. Even though they were all from soy meat, there was no question which was which. 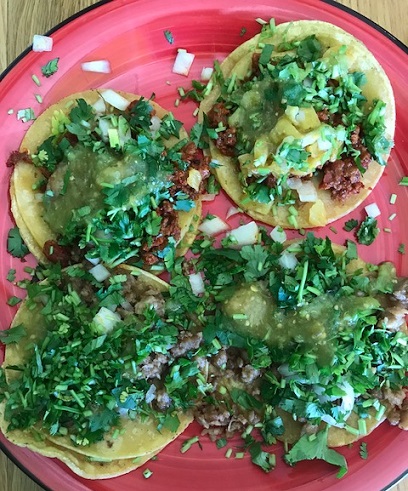 They did taste fairly convincingly of the meats they replicated, although the mouth feel wasn’t the same. Neither was the fat content, of course. I also had one of the aguas frescas, pineapple-spinach ($3), an unusual combination but one that worked. Someone else got a horchata ($3) and liked it.

I’d be open to returning, even if I prefer the real thing. Borreguitas is definitely a welcome addition to Pomona and the rest of the valley. As I write this, Borreguitas has 61 reviews on Yelp and a five-star ranking.

As you might expect, customers were mostly young, including a hipster with a lumberjack beard. But they also included families with young children. It was a nice scene, akin to something you might see in Silver Lake. 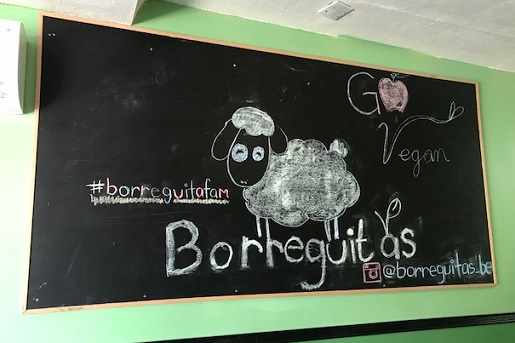 By the way, Borreguitas means little lamb. “Which is adorable,” one friend remarked, “but which they don’t actually serve.” Maybe over at La Fuente. 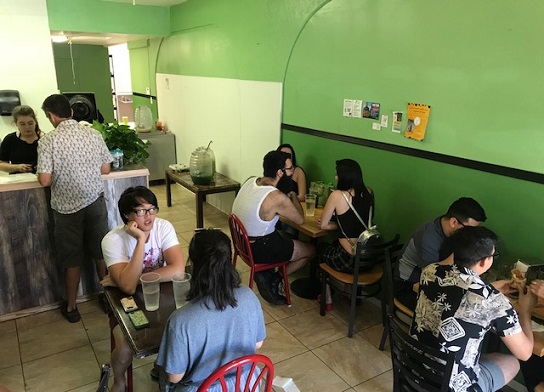 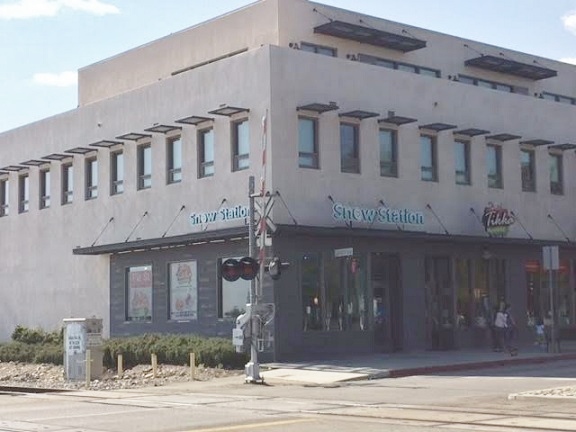 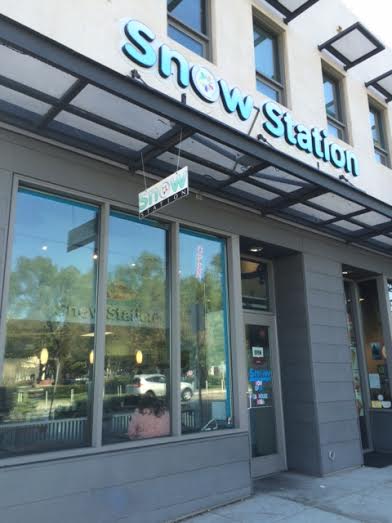 Claremont is a good ice cream town, or more accurately frozen dessert town, for which it doesn’t get enough credit. In the Village there’s Bert and Rocky’s (traditional ice cream), A La Minute (nitrogen ice cream), 21 Choices and Yogurtland (frozen yogurt), with another 21 Choices and a Baskin Robbins near each other on Foothill. And now there’s Snow Station.

Formerly a Verizon store, and then Pie St. pizza, this little shop is at the south end of what we might call the American Apparel building. Blink and you’ll miss it. Snow Station appears to be winning the battle despite its location. 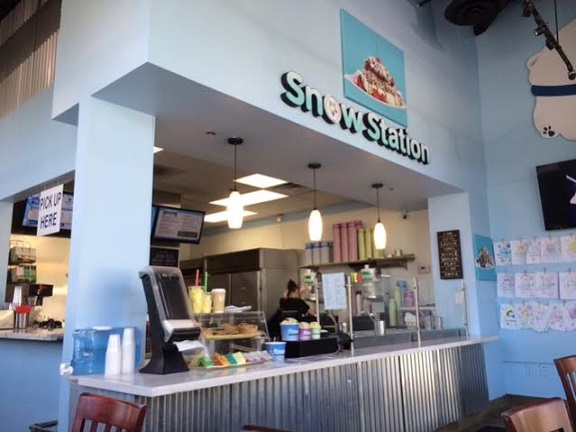 It’s a franchise of a slightly different concept, a vegan ice cream parlor, although it’s not billing itself that way. The offerings are described as a blend of ice cream and frozen yogurt, both non-dairy because soy milk is used. “No longer do vegans and lactose intolerant individuals have to watch while others enjoy ice cream or frozen yogurt,” the back of the menu reads. The result is said to be lighter in calories, which I can believe, because it’s not dense.

Flavors and toppings are reminiscent of Yogurtland. 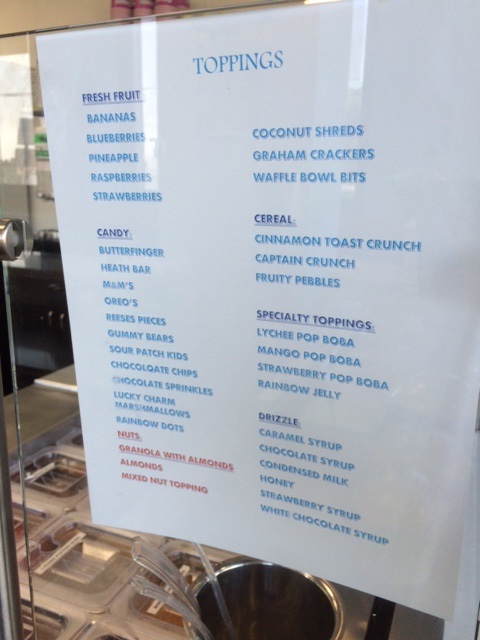 There are three sizes: mini ($4), baby ($6) and hungry ($8). My first visit was with a friend, and we each got the mini size, which looks like the kind of cup in which you’d get two scoops. For that price you get your choice of ice cream, topping and drizzle. I went with peanut butter, bananas and honey; my friend got raspberry, Heath bar and nothing. (She was a fizzle on drizzle.) 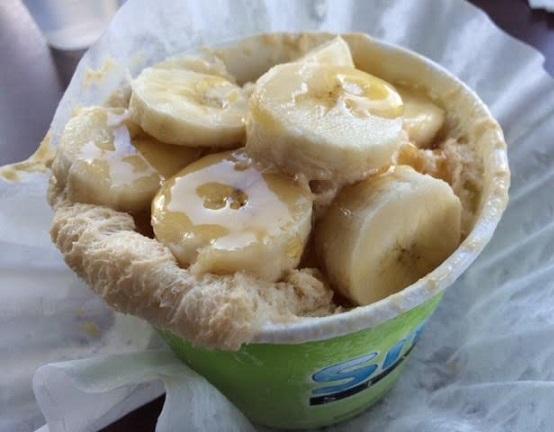 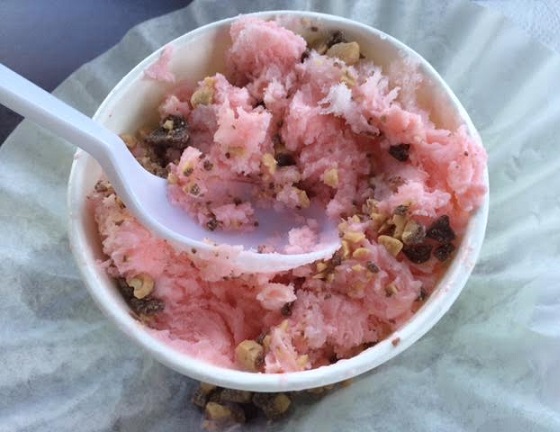 What you get is snowy, almost like shaved ice, snow with milk or homemade ice cream from the days when you churned it yourself. (Have you had the latter two? I have, although it’s been decades.)

“This is very refreshing, isn’t it?” my friend said. “It’s very tasty. This doesn’t give you brain freeze, either.” I agreed. 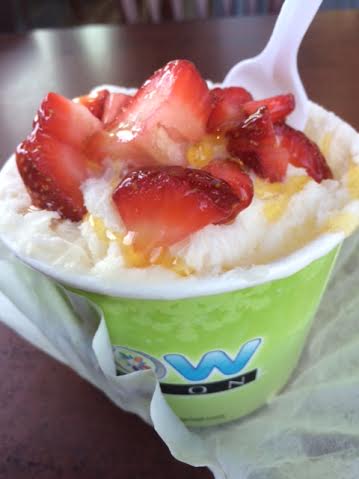 I liked it enough I went back a couple of weeks later. This time I got pineapple with strawberries and honey, another good combo, at the same size. I will say Snow Station isn’t quite as satisfying as traditional, dense ice cream, or even frozen yogurt. Another customer was heard to say, by way of praise, “It’s almost fluffy.” But it’s unique, light and very good.

Also, it’s kind of cool when a Metrolink train goes by. 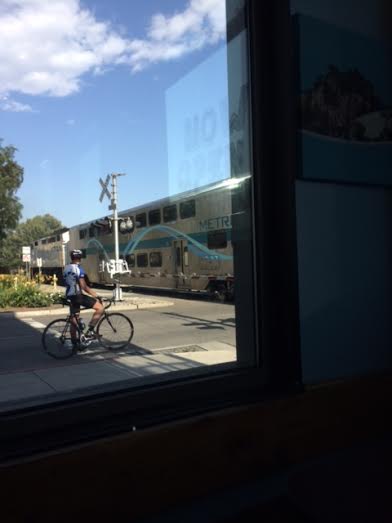 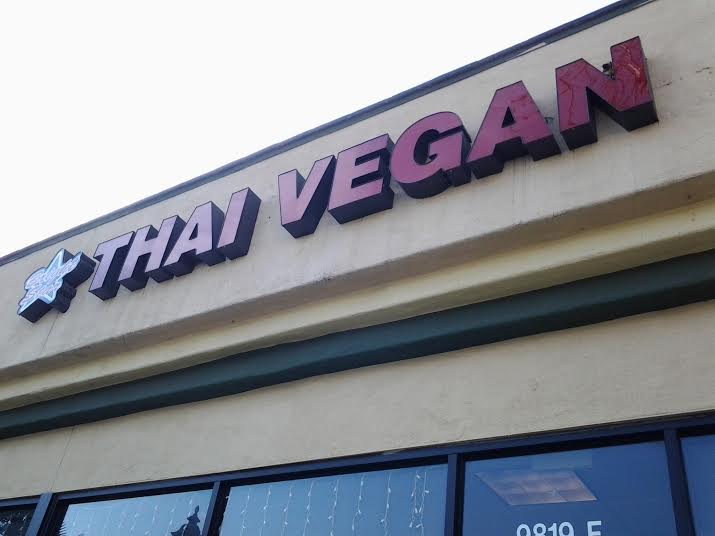 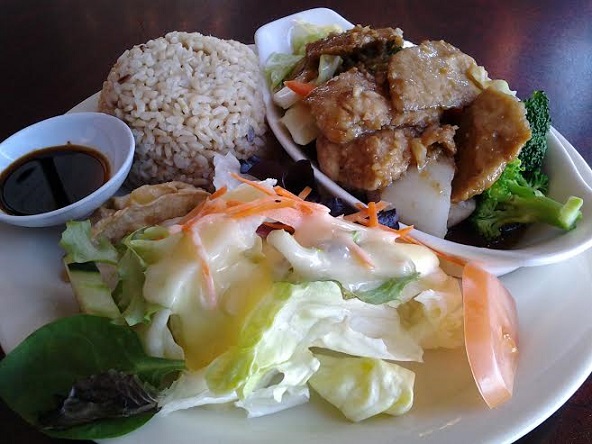