It’s truly an unnerving feeling to be somewhere you aren’t normally. Like in a grocery store an hour before they open.

Luckily for Dine 909, that’s exactly what we got to experience November 12.

Dine 909 crept under the Orange Curtain to attend the grand opening of the 100th fresh & easy in Fullerton. Coincidentally, it was just over one year ago that the first fresh & easy store opened in Hemet.

In other words, it was like dying and going to fresh & easy heaven.

We arrived almost exactly at 9 a.m., an hour before the grand opening.

We were greeted at the door by their PR person, Sallie, and stepped inside. A crowd was already gathering outside the store in anticipation of the 10 a.m opening.

Employees were wandering about, with trays of food for guests to enjoy.

Bren and I wandered ourselves, in awe of the impeccably stocked shelves, unspoilt by grabby consumers. It was a thing of beauty.

The store itself is very similar in layout to the Fontana store. Now that they are not merely taking over existing spaces, they have the chance to have a little more uniformity from store to store. 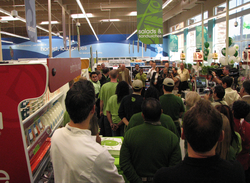 We stopped at one point to chat with fresh & easy’s Head Chef Mike Ainslie. He’s the guy who’s responsible for all their refrigerated entrées, dressings and hummuses. We tried to pin him down on what his favorite fresh & easy entrée is, but he was non-committal. He did explain that he makes his creations in his kitchen in El Segundo, and when he’s happy with the results, the chefs in the Riverside distribution center attempt to replicate his recipes on a larger scale. He also said that currently he’s into buying fresh & easy fixin’s (sauces, meats, etc.) and combining them to create new dishes.

Up next….time to cut the ribbon and let in the customers!

As is customary for all their grand openings, fresh & easy presented a $1,000 check to a local charity — in this case, it was Barks of Love Animal Rescue. CEO Tim Mason cut the ribbon and in they all went!

The store was quickly flooded with eager customers, many of whom appeared to be new to fresh & easy. Bren and I stayed outside for a little bit and got to sneak in a quick chat with fresh & easy Chief Marketing Officer Simon Uwins. He explained that he came to the U.S. 1 years before the first store opened to research what families really want out of a grocery store. Part of that research included actually going into peoples’ homes and peeking in their pantries to see what they were buying — talk about your in-depth research! He also spoke of fresh & easy’s “no compromises” approach to better food. Indeed. For instance, when you’re in their store and you see a can of Chef Boyardee raviolis right next to a can of fresh & easy organic raviolis and the price and weight are the same, it’s a no-brainer to pick the healthier alternative. Also, I find the prices on most of their pre-packaged entrées to be very good.

After talking with Simon, we went back inside. Some employees, including the friendly Lily, roamed the floor, weaving between customers and offering samples of various fresh & easy items. Back in the Kitchen Table area, employee Jason was busy putting
out more samples, slightly quicker than customers were snatching them
up.

Bren and I stayed in the store for nearly an hour, chit-chatting with some of the employees and customers, before deciding to head out.

Besides, we missed out on the cake that we were looking forward to — it was quickly gobbled up by the swarm of customers who rushed in as soon as the doors opened.

Congratulations, fresh & easy, on your first year and first 100 stores! We’re really looking forward to those stores we know will be opening soon here in the Inland Empire. Thanks especially for letting Dine 909 be a part of your special celebration!