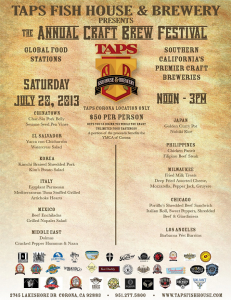 Nearly three dozen Southern California (and one from outside the area) breweries are participating in the event, with about a third coming from the Inland Empire.

Beer isn’t the only draw, as participants will be able to sample dishes representative of cuisines from around the world, from Korea to El Salvador and the Middle East to…Milwaukee?

Tickets are $50, which grant you unlimited food tastings and 15 beer samples.

A portion of the proceeds will go to the YMCA of Corona.

Here’s a look at the participating breweries:

For more information, including a look at the event’s menu, click here.