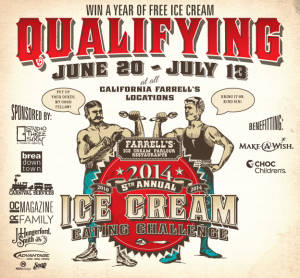 Sunday (July 13) is the last day to head to a participating Farrell’s Ice Cream Parlour restaurant to try to qualify in the chain’s ice cream eating challenge.

Individual challengers can try to qualify by paying $20 (proceeds benefit CHOC Children’s and Make-A-Wish). Challengers will receive a three-scoop sundae, a limited-editon Farrell’s Ice Cream Challenge shirt and a $5 coupon, good on a future visit.

The goal is to eat the sundae as quickly as possible. (Current leaders can be found here.)

There are several qualifying categories: Individual men’s, women’s and kid’s (ages 9 to 15), plus big and small (one adult, one child 9 or under) and four-person team.

Winners in each category will receive a year’s worth of Farrell’s Ice Cream and a humongous trophy.

Winners in the professional categories will also win a cash prize.

Contest qualifying can be done at either of Farrell’s Inland Empire locations (Rancho Cucamonga and Riverside), as well as Buena Park, Brea, Mission Viejo, Sacramento and Santa Clarita.