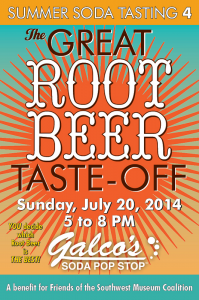 We’ve mentioned in the past that there are some things worth heading out of the Inland Empire for and one of those things is Galco’s Soda Pop Stop in Highland Park.

While the store (and its hundreds of soda varieties) is worth visiting any time, the last few years the store has hosted a great summer soda tasting event, which doubles as a fundraiser.

This year, the focus is on root beer. The store will have more than 75 varieties of root beers, birch beers and sarsaparillas available for sampling.

Proceeds from the event benefit the Friends of the Southwest Museum Coalition, a group that is working to reopen Los Angeles’ first museum as well as the Casa de Adobe to display portions of the museum’s collections.

The event will also feature live music and other entertainment.