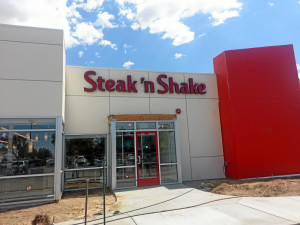 The High Desert seems to be kind of a testing ground for restaurant chains. If a chain only has one California location, it feels like it’s usually up in the High Desert.

When Golden Corral returned to the state, it first showed up in Hesperia.

The first civilian-accessible Dunkin’ Donuts in the chain’s recent return to California was in Barstow.

Early last year, we mentioned that Steak ’n Shake would be opening its first California location in Adelanto.

While that location appears to still be in the works, another is set to open in the High Desert on Monday (July 28) in a former Carl’s Jr., just off the 15 Freeway, at 12160 Mariposa Road in Victorville.

It was originally slated to open Monday of this week.