Timed seemingly to the minute when McDonald’s began rolling out its expanded All-Day Breakfast menu across Southern California, Jack in the Box today announced the availability of its Brunchfast menu across the entire chain.

The fast food chain had been testing the menu earlier this year in about 20 locations throughout Riverside County. 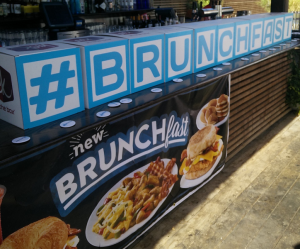 While the official launch comes Monday (October 3), the Brunchfast menu is available now at your local Jack in the Box.

The menu has slimmed slightly from its test, and now contains a bacon and egg chicken sandwich, the Brunch Burger, the Southwest Scrambler Plate, homestyle potatoes and orange cranberry muffins.

The chain also featured a French toast platter and a sourdough omelet sandwich as part of the test, but those items are not included in the launch. I fully expect there will be further refinements to the menu in the future.

You don’t have to wait for mid-late morning to try the new menu. As with all of Jack’s menu, it’s available anytime.

Jack in the Box locations can be found throughout the Inland Empire.