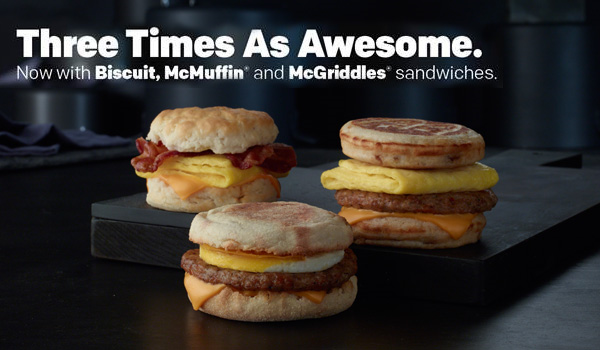 In addition to English muffin sandwiches, diners can now choose biscuit sandwiches or McGriddles any time of day.

Which, precisely, is why our excitement for McDonald’s initial all-day breakfast offering was tempered: You couldn’t get their full breakfast menu any time. And, bizarrely, you still can’t.

Until recently, at most McDonald’s nationwide — including Southern California restaurants — all-day breakfast sandwich offerings were limited to those with McMuffin in the name: Egg McMuffin, Sausage McMuffin and the Sausage and Egg McMuffin.

Now, both McMuffin and biscuit sandwiches, as well as McGriddles, are available all day at locations nationwide.

However, that doesn’t mean that all breakfast offerings will be available all day.

In addition to individual restaurant participation — I’ve been to several locations locally that don’t serve hash browns all day — there are a few breakfast items that remain available only in the early hours.

The Southern California-only breakfast bowls and the English muffin-made Egg White Delight sandwich, along with the deluxe breakfast platter, remain unavailable to afternoon and evening diners.