“Every once in a while, along comes something so revolutionary it changes everything. This…is not that, but it’s close.”

With tongue firmly planted in cheek, the chain has designed the Suction Tube for Reverse Axial Withdrawal (aka the STRAW), made specifically for enjoying the new Chocolate Shamrock Shake.

You see, the Chocolate Shamrock Shake consists of half a chocolate shake layered with half a Shamrock shake, and the J-shaped, triple-holed STRAW, is engineered to deliver that 50/50 flavor mix in with every (well most, perhaps) sip.

The chain will be giving away just 2,000 of the precision instruments at select restaurants nationwide, with the purchase of a Chocolate Shamrock Shake.

If you’re interested in getting one, be prepared for a road trip. The only California locations for the giveaway are next week in Arroyo Grande and Roseville. The next closest locations are Lehi, Utah, and Boise, Idaho.

All is not lost, however! Giveaways apparently will also happen via McDonald’s Facebook page and the local McDonald’s Twitter accounts, of which ours is McDonald’s SoCal, so follow away! 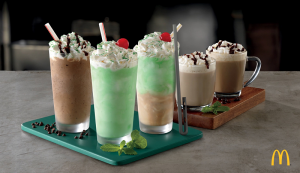