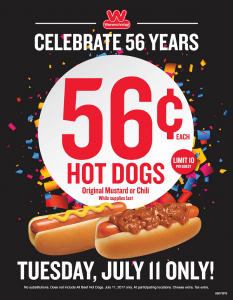 However, it’s just a penny in a year’s time.

To celebrate its 56th anniversary today (July 11), the world’s largest hot dog chain is offering either an original mustard dog or chili dog for just 56¢.

Guests can purchase up to 10 hot dogs at that price.

Wienerschnitzel restaurants can be found throughout the Inland Empire.