Well, now we know who was driving the Crave Van…

Jack in the Box is playing games with its customers. Literally.

The game — in which the player careens through the streets of a virtual city in the Crave Van to deliver the chain’s new Munchie Mash+Ups — was released this week. 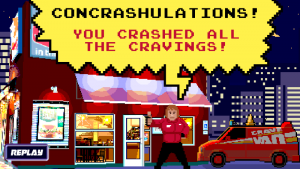 The design of Crave Crasher takes a decidedly 8-bit approach and would be right at home in an ‘80s arcade.

The Munchie Mash+Ups themselves come in three varieties, and all begin with a base of hash browns and white cheese sauce, topped with the following ingredients:

With a minimum of 1400 milligrams of sodium and 670 calories, these are obviously not health food.

However, I’m guessing the crowd they’re catering to doesn’t really pay any mind to such details.

They’re available for $3 at participating locations.

If you want to try the Munchie Mash+Ups, head to your nearest Jack in the Box.

If you want to play the game, simply click here.