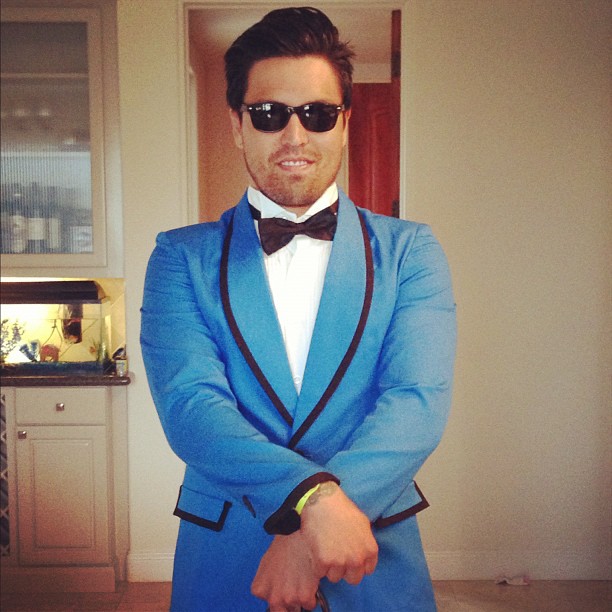 Dodgers pitcher Brandon League is dressing up as Psy for Halloween. The Korean rapper is only known in United States for the song and music video “Gangnam Style,” a frequent champion on “Dodgers Jukebox” this year.

Coincidentally, San Francisco Giants broadcasters Jon Miller and Dave Flemming were doing the “Gangnam Style” dance today — a “perk,” I suppose, when your team wins the World Series and throws a parade.

Usually, another “perk” of winning the World Series is that you’re considered the favorites to win your division next season. Not in League’s opinion.

END_OF_DOCUMENT_TOKEN_TO_BE_REPLACED

Don Mattingly was not among the leading vote-getters for the IBWAA Manager of the Year announced Wednesday. The awards went to Davey Johnson and Buck Showalter in their respective leagues. The IBWAA is independent of the BBWAA, but shares a few voters in common and serves as a predictor of the BBWAA end-of-season awards.

The top three vote getters in each league:
END_OF_DOCUMENT_TOKEN_TO_BE_REPLACED

Vin Scully can make room for one more trophy in his case.

The Dodgers’ Hall of Fame broadcaster will be presented with the Professional Baseball Scouts Foundation’s Allan H. “Bud” Selig Executive Leadership Award at the Foundation’s 10th annual “In The Spirit of the Game” Sports and Entertainment Spectacular at the Hyatt Regency Century Plaza Hotel on Jan. 12, 2013. Selig will present Scully with the award.

The Dodgers signed Brandon League to a three-year contract yesterday worth $22.5 million. General manager Ned Colletti envisions League closing, though ultimately that decision will fall to manager Don Mattingly. The value of League’s contract makes that seem like a straightforward decision — why pay a guy $7 million-plus to pitch the eighth inning? — but the decision on paper is closer than you might think.

For one thing, League is one of three pitchers who closed games for the Dodgers last year (three-and-a-half, if you include Ronald Belisario’s brief time co-closing with league in September). He, Belisario and Kenley Jansen are all high-strikeout power pitchers with a repertoire worthy of the role. Of course, if Jansen weren’t waiting in the wings at the time, the Dodgers might have continued to let Javy Guerra pitch through his early-season struggles;

Guerra finished the season with eight saves and a 2.60 ERA. Arguably, that makes four capable closers in the Dodger bullpen. And while Guerra pitched his way out of the job, Jansen only lost the job because of a health setback.

Among that quartet, League has the most career saves (60). Want to guess how many active major-league pitchers have more? Thirty-seven.

Experience isn’t everything — I would rather have League pitching the ninth inning in 2013 than, say, Jason Isringhausen — but the point is that Jansen (34 career saves), Guerra (29) and Belisario (3) aren’t that much less proven in the ninth inning than League.

So for today’s poll question, we give you the manager’s jersey and a baseball to hand to your closer of choice.

No Dodgers will win Gold Glove awards this season. That was an anticlimactic revelation in an hour-long show on ESPN2 Tuesday night, when the awards were announced on live television for the first time.

Florida Marlins pitcher Mark Buehrle got the award over Dodgers pitcher Clayton Kershaw, the last of the Dodgers’ finalists to be announced. Kershaw completed his second consecutive errorless season and hasn’t committed an error since Aug. 1, 2010 but Buehrle, who left the Chicago White Sox to sign with the Marlins last winter, has won the award each of the last three seasons in the American League.

Jason Heyward of the Atlanta Braves edged Andre Ethier for the award among National League right fielders. Mark Teixeira of the New York Yankees got the nod over Adrian Gonzalez among American League first basemen (Gonzalez was one of three AL finalists despite being traded to the Dodgers in August).