Jesus Flores is 28 years old and has caught 263 major-league games. 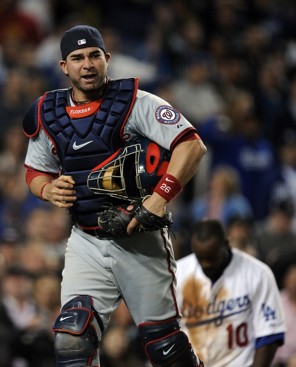 That makes him younger and more experienced than the Dodgers’ starter, A.J. Ellis.

The Washington Nationals granted Flores free agency in November and the Dodgers signed him to a minor-league contract with an invitation to spring training on Tuesday.

Flores figures to compete with Tim Federowicz for the backup job. Considering Federowicz’s lack of experience (10 major-league games), it could make for an interesting competition.

Flores’ career batting numbers aren’t much to look at, though he did hit eight home runs and drive in 59 in only 90 games in 2008. The Venezuela native batted .301 in 2009, when surgery to repair a stress fracture in his right shoulder limited his season to 29 games. Flores hasn’t been the same since.

Flores is currently playing for Navegantes del Magallanes of the Venezuelan Winter League.

• A nice feature on Clayton Kershaw by USA Today, focusing on his work in Zambia. An important baseball takeaway: “Kershaw says he’s open to negotiate a long-term deal anytime.”

• ESPN’s Steve Wulf on the only member of the 2013 Hall of Fame class: “Deacon learned the game of baseball from a Union soldier returning home from the Civil War in 1865.”

• Today also would have been Frank Zamboni’s 112th birthday. Zamboni invented his patented ice-resurfacing machine in Paramount in the 1940s. Google has commemorated his invention on its home page today.

• Here’s a nice mix to stream at your next house party, shindig or box social: