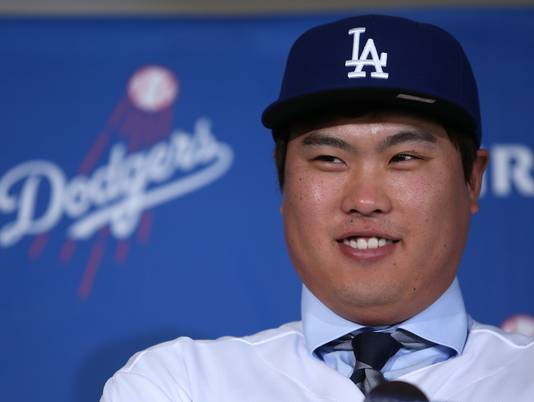 Forget having the best 1-2 starting combination in baseball. Ned Colletti clearly intended to put together the majors’ best 1-2-3-4-5-6-7-8 staff this winter.

When the Dodgers pitchers and catchers report to camp Tuesday, they present a puzzling situation that only time can solve. Chad Billingsley hopes time can heal the torn ligament in his elbow, not season-ending Tommy John surgery. Ted Lilly hopes he can pitch like a legitimate fifth starter, having not pitched in the majors since last May because of injuries. He, Chris Capuano and Aaron Harang may have to hope that Colletti can find a desirable destination for their talents outside of L.A.

If healthy, it’s hard to imagine this group staying together. Otherwise, the Dodgers are left with the first eight-man rotation in major-league history, and wouldn’t that be an interesting outcome to what promises to be an interesting camp.

The severity of Kershaw’s hip injury last September may have been overblown. After skipping a start to rest his hip, Kershaw made his final three starts of the season on schedule. All he did was allow two runs in 21 2/3 innings to clinch his second straight ERA title.

Kerhsaw said he’s had a normal off-season (mission trips to Zambia are a normal part of his life). So it appears he’s healthy and ready to reprise his role as the staff ace.

The 24-year-old can deflect questions about his hip by pitching pain-free, but he can only quash questions about his expiring contract by signing an extension. That’ll take time too – Kershaw could be seeking a record contract in his final year of arbitration. He hits free agency in 2015.

The right-hander is the Dodgers’ number-two starter. Has there been a better 1-2 starting combo in town since Don Drysdale and Sandy Koufax?

Greinke hasn’t thrown a pitch in a Dodgers uniform yet, so it’s important to temper the hype. Suffice it to say that expectations are high after the 29-year-old signed a six-year, $159 million contract in December. Maybe the biggest variable is how Greinke will react if things don’t go smoothly right away.

He received very little run support during seven starts as a Dodger last year, winning only two of them, but Beckett wasted little time putting Boston behind him. The Dodgers will take his 2.93 ERA and eight strikeouts per nine innings over a full season, knowing the wins will come.

Few Dodgers can say this, but there’s less pressure on Beckett now than perhaps any point in his major-league career. Is that a good thing? Is that one-good-season, one-bad-season streak he’s been riding since 2005 real?

The team can only hope.

The Dodgers have been scouting Ryu long enough that they felt comfortable signing him for six years and $36 million. Is there any pitcher more expensive but lesser known going into spring training?

Ryu turns 26 in March. While it will be tempting to base his career potential on what he does in Cactus League play, keep in mind the enormity of this transition – a new culture, a new country, a new team, and the highest expectations of his professional career.

Being able to lean on former Dodger Chan Ho Park as a mentor could be an important asset for Ryu in the coming months. At some point, he’ll be on his own.

Billingsley has tested his pitching elbow often enough this winter that there’s good reason for the Dodgers to be optimistic about his recovery. The scary thing is that a torn UCL allows for no middle ground: It’s either Tommy John surgery and no season, or a return to health.

And it’s not just Billingsley’s future on the line. If he misses the season then Lilly, Capuano and Harang are battling for the final rotation spot.

If he comes back, there’s no telling if Billingsley comes back as the pitcher he was when he hurt the elbow last August. He was on a roll at the time, finishing the season on a 6-0 streak. His career record of 80-61 is pretty good for a number-five starter in his prime.

At 37, Lilly has plenty to prove. His left shoulder simply didn’t heal from the inflammation that ended his season in May, and he finally needed arthroscopic surgery in September. Was his 5-1 record and 3.14 ERA before the injury a fluke?

Lilly should relish the opportunity to answer that question, but because of the numbers game he might not get it in Los Angeles. He’s the least tradeable among the surplus starters with a $13.2 million salary this year that exceeds the combined salaries of Capuano ($6M) and Harang ($7M). Capuano and Harang are younger, too.

A fierce competitor and grizzled veteran, Lilly won’t go down without a fight.

Recently, the 34-year-old lefty said he’d be willing to pitch out of the bullpen. That versatility might be Capuano’s best asset. Will the Dodgers use this spring to audition him for a bullpen job?

The 34-year-old righty was 10-10 in his first season as a Dodger. That’s not enough to call for his head, but Harang is the top trade candidate in this group for a few reasons.

His consistency from the first half (6-5, 3.51) to the second half (4-5, 3.73) last year should allay concerns about his age. Harang’s salary would be attractive to a small-market team looking for veteran rotation help, and there are always plenty of those. His laid-back demeanor seems like it would fit in anywhere.

Plus, Harang has never been a reliever in his career. If the Dodgers can deal him to a team with a deep farm system and room for a right-hander starter — say, St. Louis or Houston – there’s no reason for Harang to switch to the bullpen now.

Fife is a known quantity: A Triple-A caliber pitcher who showed some resiliency in five spot starts with the Dodgers, posting a 2.70 ERA. At 26 he’s past the prospect stage, but would likely accept a Triple-A assignment without putting up a fuss.

Besides, no team can have enough bald, bespectacled pitchers with herky-jerky windups in camp.

The Simi Valley native was promoted to the 40-man roster for the first time in his career last November. At Double-A Chattanooga, Magill went 11-8 with a 3.75 ERA. The right-hander fanned 168 batters in his 146.1 innings.

He’s in the major-league camp to watch and learn more than pitch, but it’ll be interesting to see how far along he is in his development.