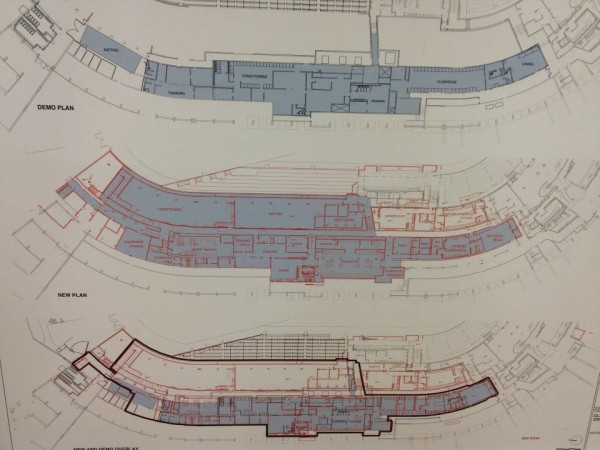 Team president Stan Kasten unveiled the above schematic showing the clubhouse-level renovations at Dodger Stadium. It’s a series of three images. The top image shows the old clubhouse (in blue). The middle shows the expanded area. The bottom image shows the overlay of the new (black outline) atop the old (blue). Kasten didn’t reveal the exact square footage before and after the renovation, but he said the total area will roughly double.

This area of Dodger Stadium is hidden to most fans. For reference’s sake, the blue protrusion extending from the “top” of the clubhouse (top image) is the tunnel leading into the third-base (home) dugout.

“We had the world’s worst clubhouse,” Kasten said. “I said to Sandy (Koufax), it was substandard in your day and it hasn’t been improved since.”

In order to expand the clubhouse, crews had to excavate an unused area full of earth behind the dugout. The alternative was to cut into the mountain on the other side of the clubhouse, a more time- and labor-intensive process. Among the highlights of the finished product:

Because the visiting team won’t have any reason to venture into the Dodgers’ clubhouse (Don Mattingly said this was his favorite part of the redesign), Kasten pointed out that the number of people using the facility is halved, while the size is doubled.

Kasten reiterated that he expects the project to be done by opening day, and that it will give the Dodgers the biggest home clubhouse in the majors. He conceded that certain aspects of the ballpark renovations might “leak” past opening day, but not the clubhouse. The concrete roof has been poured and the walls are currently being framed, he said.

One other note: The “baseline” seats behind the dugouts will be reconfigured to improve sightlines. The total number of seats in those areas will be reduced as a result.