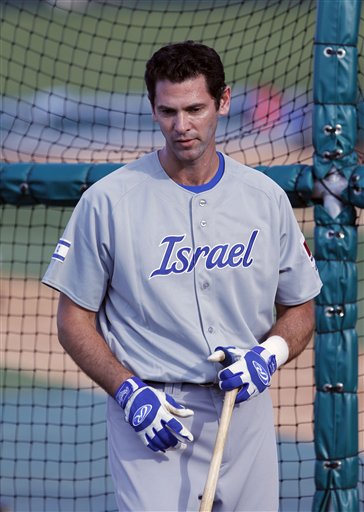 Former Dodgers outfielder Shawn Green was in camp and in uniform as a special instructor this weekend. We got his thoughts on a variety of topics Sunday, including Sandy Koufax, the Hall of Fame, the Dodgers’ new owners, and his playing ambitions.

Green still has playing ambitions — more WBC ambitions than MLB ambitions — but he isn’t pressing the issue. At age 40, he’s content to be a father to his 7- and 10-year-old daughters. I’m saving that story for tomorrow’s editions.

Here’s what else Green had to say:

How did you wind up here this weekend as a “special instructor”?

(Dodgers GM) Ned (Colletti) reached out to me and said this year they’re going to start to bring some former players in as guest instructors, asked me if I’d be interested and I said, yeah of course I’d love to. That was it really. It was a couple weeks ago. It wasn’t a big planned thing that had been in process for a while. I don’t know how long it had been in process but it’s great.

How involved have you been with the team since you retired after the ’07 season?

I’ve been involved on a very small level. I’ve done some community stuff. I came out a few times and spoke to the prospects and last year I came out for three days in uniform and worked with the minor league guys. That was the closest, but this is the first time I’ve really been immersed on the big league side.

I’ve always felt like a Dodger. Nice portion of my career was here. I loved it. This is home. It was a natural fit.

Did you get a chance to talk to Sandy Koufax before he left here?

I’ve met him a bunch of times. He was always in Vero Beach. Great guy. Team Israel, we were going to have him come out but he was out of town (the week of the World Baseball Classic qualifier.) It was basically a week, but I think there’s a good chance if we would have qualified, he probably would’ve been a part of that. I can’t speak for him but we definitely would have been asking him.

There’s maybe five guys alive right now that have the kind of — like Willie Mays — that have the kind of presence he does. Guys like us, me and (fellow special instructor) Eric Karros, if guys ask us our opinion on stuff we’ll give it. But what are we going to tell someone that Mark McGwire or Don Mattingly can’t say? We’re here but they’re going to be here for seven months together, hopefully more. Hopefully eight months. They’re the guys that have that connection with the players. If someone wants my opinion — a couple guys asked what I thought about certain things, I was happy to share it — but other than that I’ll shag some balls, catch some balls, do whatever they need.

What are you jealous of that players have now under the current ownership group?

The whole time when I was here it was great. It’s the Dodgers. Anytime you’re with the Dodgers it’s awesome. Fox was on its way out. McCourt was on his way in. There wasn’t that solid ownership group that was really focused on creating the best organization — not just a team that wins but whether it’s having the state of the art clubhouse, bringing in the free agents from top to bottom. This current regime is in it for the right reasons and going at it the right way.

That was cool. I didn’t expect to get any. It was never a focus of mine. I knew my numbers weren’t up to that level but it felt good to at least get that acknowledgement.

Were you surprised nobody got elected?

I don’t think I was surprised. With how it’s gone the last five years or so, they’ve set a pretty hard line about what they’re going to do if any of the guys were in any reports, or tested positive. It’s pretty well documented that anyone associated with performance enhancing drugs or looked the part, they’re going to have trouble getting in.

Should McGwire be in the Hall of Fame?

All I’ll say about Mark is, he had the most power of any guy who ever played the game. He was incredible to watch. That’s obviously for the voters to decide. He was a tremendous hitter and just like he’s the one guy, even over Barry Bonds, when the other team would stretch the whole team would be out there watching him take batting practice. He’d put on a show.

I can’t go in on individual players. If my vote counted I’d have to think about it. I understand both sides of the argument.