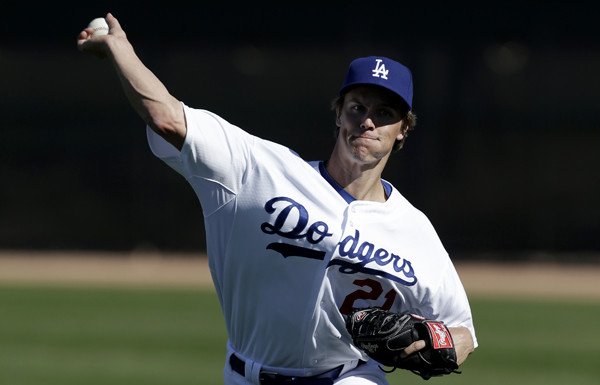 One day after Zack Greinke said there’s “zero chance” he would be able to pitch at full strength in the Dodgers’ second game of the season, manager Don Mattingly said he doesn’t want Greinke to make his season debut at less than full strength.

Already, Greinke seems more likely to begin the season on the disabled list than he is to pitch April 2 against the San Francisco Giants.

Greinke is playing catch from about 75 feet today at Camelback Ranch, the first time he’s thrown a baseball since flying to Los Angeles on Monday to receive a platelet-rich plasma injection to treat inflammation in his right elbow.

That’s a step in the right direction but a long way from where Greinke needs to be in order to make his first start on time, Mattingly said.

Greinke won’t pitch “until he’s ready to actually be able to throw like everybody else who’s going to leave spring training,” Mattingly said. “Kersh (Clatyon Kershaw) and everybody else, he’s going to have to be at that level. It’s not like late in the season, ‘if he can give us 70 pitches, we’ll take it.’ In a sense (Greinke is) just like Carl (Crawford). When he starts I want him to be able to continue on.”

If Greinke feels well enough after throwing today, he could throw a bullpen session sometime next week, Mattingly said. The best-case scenario would see Greinke pitch two exhibition games. If he is to stay on schedule to pitch April 2, Greinke would also start March 24 against the A’s in Scottsdale and March 29 against the Angels in Anaheim.

But the Dodgers aren’t betting heavy on this course of action. Mattingly said Thursday that he’s exploring alternative scenarios for the first time through the rotation.

There’s also the possibility that Greinke could face surgery. Retired pitcher Curt Schilling said on Buster Olney’s podcast that he thinks Greinke might have bone chips in his elbow — and that might not be a bad thing. Schilling said he could be ready to pitch 17 days after surgery to remove bone chips.

Greinke signed a six-year, $159 million contract with the Dodgers in December.