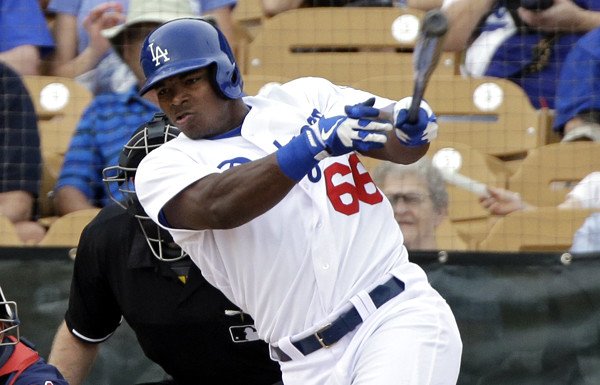 Don Mattingly has compared him to Bo Jackson.

Critics are suddenly calling his $42 million contract “a steal.”

So why, again, should Yasiel Puig begin the regular season in the minor leagues?

I posed this question to Dodgers general manager Ned Colletti on Monday. The reason goes beyond the “raw” nature of Puig’s skill set, which is has become a mandatory caveat when describing Puig’s skill set.

Last fall, Puig played daily at the Rookie and Single-A levels for the first time after not playing baseball at all for several months. It showed. “When he started playing on an everyday basis there was a variety of different things,” Colletti said — injury things like a staph infection in his elbow, and a strained hamstring, that set him back at the outset of the Arizona Fall League.

What happens if Puig becomes a fourth outfielder and starts playing every fifth day? Every sixth? The Dodgers don’t want to find out.

There are baseball things that Colletti wants Puig to be able to work on, too. The GM declined to offer specifics but it doesn’t take a seasoned scout to guess. Puig strikes out a lot for someone who doesn’t miss many pitches in the strike zone, and his base-stealing and base-running IQ are still below average for a major leaguer.

Even if those mistakes miraculously iron themselves out in the span of two weeks (they won’t), Puig can’t risk his health with a series of long layoffs when he could be playing every day in the minors.

Spring training, Colletti said, “is to set an impression to get a feel for who’s who — who you may be able to count on as the season goes on, and what they need to work on between now and the time we’re gonna need him. I think he needs to play on an everyday basis to see what a season feels like.”

So, Triple-A? Double-A?
“I wouldn’t put a classification on it, like what level do we need to see him perform at to know he’s a big-league player,” Colletti said. “He needs to play.”