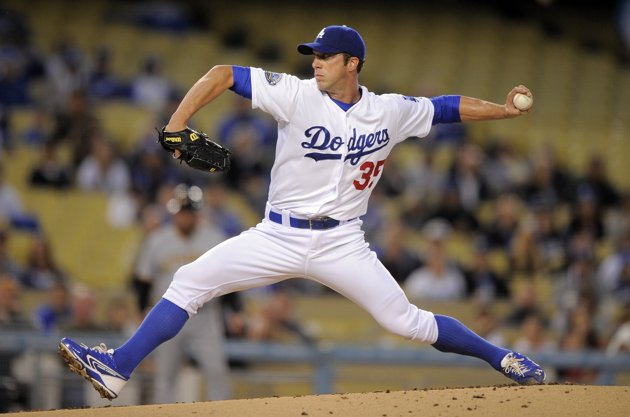 Don Mattingly said that the Dodgers’ coaching staff will meet tomorrow to discuss plans for their pitching staff. There appear to be two spots in the bullpen up for grabs, and the picture gained clarity when Mark Lowe was released this morning.

One topic that’s sure to be on the agenda: Which of the starting pitchers will become relievers?

“We’ll talk to those guys, make sure they can mentally start wrapping their arms around it, talk about ‘how would you like to work?’ … It’s nice to talk to the guys and get their arms wrapped around it so they can make the adjustment,” Mattingly said.

Chris Capuano is the likely candidate. Mattingly has said, in so many words, that Aaron Harang and Ted Lilly are the slowest relievers to warm up. That’s probably an anecdotal observation, not one based on a stopwatch. And while Lilly has said he’s open to moving to the bullpen, Harang didn’t share the same sentiment. So far all three pitchers have pitched as starters, either in Cactus League games or in Triple-A spring games.

That paragraph could have been written a month ago. It’s still true because the team’s projected five starters (Clayton Kershaw, Zack Greinke, Josh Beckett, Chad Billingsley and Hyun-Jin Ryu) have pitched effectively and avoided serious injuries.

The ability to warm up quickly isn’t the only determining factor in the decision. Part of the coaches’ conversation involves defining the new reliever’s role.

“You weigh in all the factors,” Mattingly said. “How would you use them? Some guys you can see pitching different styles, different ways. Can I use him as a specialist? Can I use him long? Can I use him one-plus (inning)? Different guys have different weapons that I can use out of the bullpen.”

But the ability to warm up quickly is critical.

“Like (Randy) Choate last year,” Mattingly said. “He says, ‘give me half a hitter and I’ll be ready.’ He throws over to first base, then (I) walk out and he’s ready like that.”