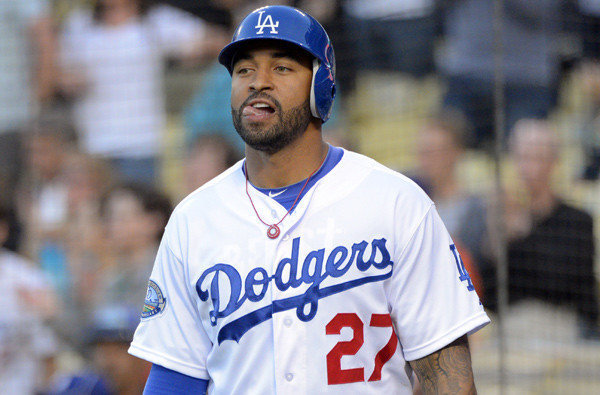 Matt Kemp has evolved from a poor hitter to a singles hitter this season, and he may or may not be done evolving. (Associated Press)

Matt Kemp collected his 1,000th career hit yesterday afternoon. Good thing the Dodgers recognized the accomplishment on the video board, otherwise he might not have known until after the game.

Kemp collected the milestone hit on a single, which seems appropriate. Kemp has been stuck on one home run — against New York Mets phenom Matt Harvey, no less — for almost a month. If he hits one home run a month, Kemp will finish the season with six.

If I could have written more about Kemp in yesterday’s notebook, I might have touched on a number of topics that ESPN’s Buster Olney discussed in his podcast the other day, namely:

• Kemp is getting eaten alive by pitches down and away. His strikeout rate in that area is among the top five percent in the league.
• Kemp has less power. He’s lost 25 feet off his average fly ball.
• It’s not luck. His batting average on balls in play is .363, slightly above his .352 career average.
• Kemp seems to be avoiding putting stress on his left shoulder, just as he did last September when the shoulder was legitimately hurt.

Kemp started the year unable to hit the ball for power or average, so we could be looking at a snapshot moment in his road back from last year’s shoulder surgery. Maybe not. If we’re looking at the new Matt Kemp, how long before the Dodgers move him up (say, to 2nd) or down in the lineup?

• Shiver me timbers, another commentary on Don Mattingly’s job security! And another!

• From MLB.com: “[Yoenis] Cespedes has had more time to refine his game, but [Yasiel] Puig is on a similar path of offensive prowess. Both have eye-popping strength and game-changing tools.”

• Staying in the Dodgers’ system, here is what the Albuquerque Isotopes’ lineup looked like sans Scott Van Slyke and Tim Federowicz.

• Random Triple-A split: Matt Wallach has drawn four walks as an Albuquerque Isotope, all against left-handers (in seven plate appearances). In 28 plate appearances against right-handers, he has not walked once.

• Expect a decision today on Wednesday’s starter against the Washington Nationals. It will either be Matt Magill or Zack Greinke. Both will throw a bullpen session today.

• Happy birthday to former Dodgers pitcher John Ely and the late Johnny Roseboro. The longtime Dodgers catcher may be best remembered for this.

• According to the Elias Sports Bureau, the last time five pitchers each threw nine innings allowing two or fewer hits and no runs in a seven-day span occurred in July 1992. ESPN.com points out that Roger Clemens, Ben McDonald, Hipolito Pichardo, Kevin Appier and Scott Erickson did it then; this week’s five pitchers were Matt Harvey, Jon Lester, Shelby Miller, Adam Wainwright and Chris Sale.

• A self-described fan of “Top 40” music recently wondered if I’d ever throw in a song by an artist he’s heard of. Here’s a great, rare collaboration between Neil Diamond and Brian Wilson called “Delirious Love” (set to photos of Tom Cruise and Katie Holmes).