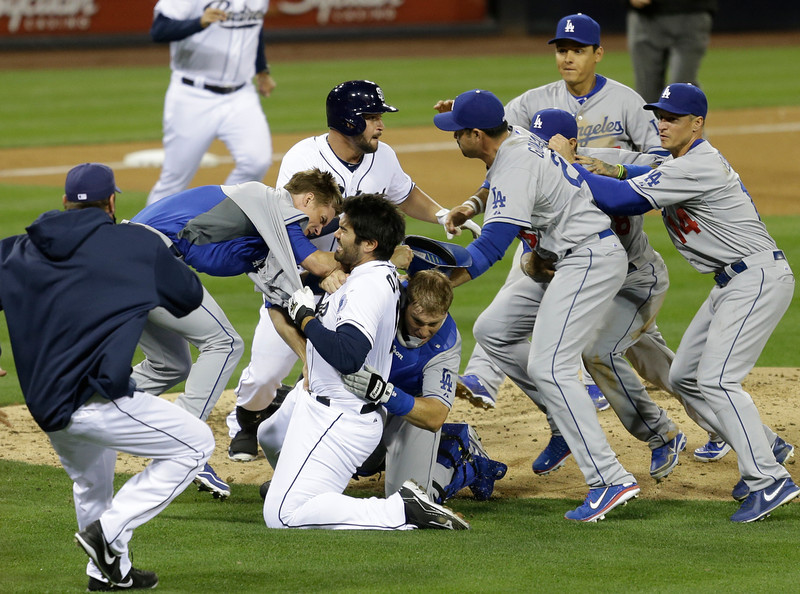 Maybe the only way Zack Greinke hits the turf is if he’s pulled down. (Associated Press photo)

Zack Greinke can recall diving exactly once on a baseball field. All he remembered Tuesday was that it was on a bunt attempt by Gerald Laird, maybe in 2009, and it didn’t end well for him or the Kansas City Royals.

After some digging, we believe the play occurred in the second inning of a game between the Royals and Detroit Tigers on July 8, 2009. Josh Anderson was on second base, having hit a ground-rule double. Laird attempted to bunt Anderson to third base but popped the ball up toward the pitcher’s mound.

Greinke dove for the ball and missed. He tried throwing to first base to retire Laird, but Laird wound up with a single. Since there’s no video on YouTube or MLB.com, we’ll rely on this descriptive quote from Greinke, courtesy of that night’s Associated Press game story: “That was a stupid play, because it was a terrible bunt. If I catch that, it is a double play, and even then, I made a five-hop throw to first.”

On Tuesday, Greinke said that he could have caught the ball, and turned the double play, if he didn’t dive.

“I feel at least 90 percent of all dives are unneeded,” he added.

Why is all this relevant? Well, Greinke is under strict orders not to dive tonight when he returns from a fractured clavicle to start against the Washington Nationals. The pitcher assured Dodgers manager Don Mattingly that this wouldn’t be a problem, and the play from four years ago is a large reason why.

Also, it was satisfying to uncover the dive Greinke was referring to, like the guy who figured out what day Ice Cube was rapping about in the song “It Was a Good Day.”

• Have you seen the video of Hyun-Jin Ryu playing catch with a young fan in the outfield seats? It’s cute.

• Give me your tired, your poor, your huddled masses yearning to breathe free, and your Clayton Kershaw trivia.

• Did the Dodgers win the Adrian Gonzalez/Josh Beckett/Carl Crawford/Nick Punto trade with the Red Sox?

• Bryce Harper will probably undergo more tests after complaining of nausea at Dodger Stadium Tuesday. In case you missed it, Harper hit the wall hard Monday.

• I posted a link a while ago to an article about which catchers are the best and worst at framing pitches. Here’s an extended piece about the art form.

• Some scouting reports that nailed it, including (maybe the only) one guy who didn’t recommend a total “pass” on Mike Piazza.

• How players do on their Bobblehead Day. (The article makes no mention of Matt Kemp extending his hitting streak to 13 games last night.)

• “Next To You” by Poolside has tremendous Summer Jam potential upside.