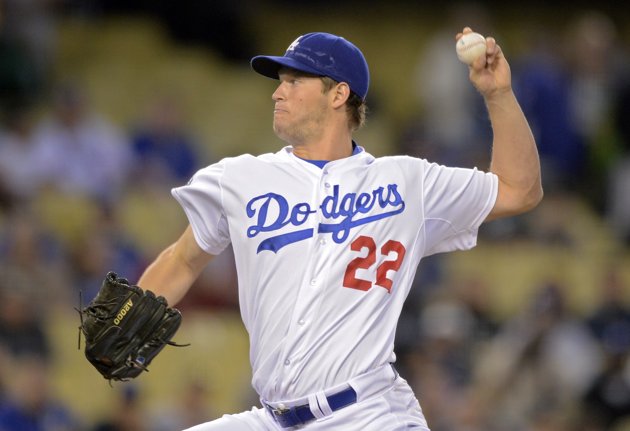 Clayton Kershaw is helping the Dodgers in the standings and at the turnstiles. (AP photo)

For all the logical reasons one can cite for the improved attendance at Dodger Stadium — it’s rising faster than Frank McCourt’s net worth — there’s a reason to be surprised.

A 17-22 record comes to mind, as does a list of injured stars that includes Hanley Ramirez and Zack Greinke (prior to Wednesday). Most tickets aren’t getting cheaper and it’s no easier to get in and out of the ballpark than it was two years ago, when the Dodgers averaged 36,236 at every home game.

Yet the Dodgers’ average attendance of 42,706 through 24 home games is the highest in Major League Baseball. They became the first team to surpass 1,000,000 tickets sold on Wednesday. Their season-ticket base of approximately 31,000 is a major boost. So is Clayton Kershaw, whose six home starts attracted an average of 47,905 fans. The Dodgers’ average attendance in their other 18 home dates: 40,974.

Let’s give credit where it’s due. Just take a look down the freeway and you’ll realize that fan loyalty is no small object.

The Angels are hemorrhaging fans in the midst of their struggles. While their average attendance of 37,232 represents 82 percent of capacity at the smaller Angel Stadium (the Dodgers are at 76.3 percent capacity), these numbers are shrinking. A season-low 31,917 fans attended the Angels’ loss to the Kansas City Royals on Wednesday. They’ve averaged about 4,000 fewer fans per game in May than April (34,656 compared to 38,735).

• Interesting breakdown on MLB.com of how last year’s playoff teams performed quarter-by-quarter — that is, at roughly 40-game intervals throughout the season (40, 81, 121 and 162). At 27-13, the Dodgers had the best record in baseball one-quarter of the way through 2012. The eventual American League champion Tigers were 19-21. So yes, the Dodgers can overcome a 17-22 start. However, of the eight playoff teams last year, only two had a single quarter-season in which they won 18 or fewer games (that’s two of a possible 32), and the Tigers overcame a significant bit of history: Detroit is one of only six teams among the 42 that played in the last five postseasons to have a losing record at the one-quarter marker.

• Matt Harvey is on the cover of this week’s Sports Illustrated, but Kershaw is the front-runner for the National League Cy Young Award.