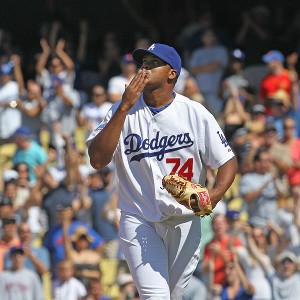 The Dodgers have racked up a lot of streaks lately, enough to put a fraternity house to shame. The top five, in my opinionated order:

1. 15 straight road wins. This streak ended Tuesday in a 5-1 loss, curiously the only game in St. Louis started by Clayton Kershaw, the presumptive Cy Young award favorite. The Dodgers fell three games short of a major league record but created eight bottom-of-the-ninth save situations in the process, making a hero of Kenley Jansen. More on him … now.

2. Kenley Jansen’s 27 straight outs: This one ended last night, ensuring that Mark Buehrle‘s record of 45 straight batters retired is safe. (Bobby Jenks still holds the record for relievers with 41.) Eric Stephen at TrueBlueLA.com charted each out today, while Evan Bladh at Opinion of Kingman’s Performance reminded me that the streak began rather inauspiciously in Toronto.

3. Fourteen straight series at .500 or better (10 wins, 0 losses, 4 ties). Managers tend to think in terms of series, and players do to an extent, but I think for many fans this concept is harder to grasp. Consider that when the streak began June 23, the Dodgers were in fifth place in the National League West. Since then, the Dodgers have only played one team (Arizona) that was in first place at the time of the series — so they were all series that a good team would expect to win. The Dodgers simply weren’t a good team when the streak began.

4. Eleven straight wins in one-run games. Again, this is largely due to Jansen and a bullpen that has held batters to a .179 batting average since the All-Star break. Paco Rodriguez has faced 33 batters in the second half and five have reached base.

5. Yasiel Puig‘s 16 straight games reaching base. Nobody’s talking about this one because it’s only 16 games, but those 16 games have seen Puig walk 12 times and reach base at a .520 clip. He’ll go for number 17 tonight.

Some bullet points for a Singaporean Independence Day:

• From the Tampa Bay Times: Among the subplots to the Dodgers-Rays series is Carl Crawford and J.P. Howell facing their former team.

• Tonight’s pregame festivities include check presentations, a first pitch by City of Hope and Children’s Hospital Los Angeles doctors, and a special “kids take the field” with young cancer patients getting autographs from their favorite players.

• “As long as there is poverty in the islands, players will be looking for a way out.” Great read on PEDs and Latin American ballplayers in the Toronto Star.

• I might be really late to this party, but this is worth a look if you haven’t seen it: Pedro Guerrero‘s turn in the SABR Bio Project.

• If you need some thumping rock music to get you through your midday, here’s “Do I Wanna Know?” by the Arctic Monkeys: