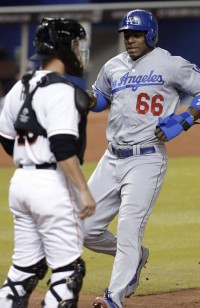 Clayton Kershaw handed the ball to Brian Wilson in the ninth inning in a game that began just before 10 a.m. Pacific Time.

Otherwise, everything the Dodgers did to the Miami Marlins on Thursday restored a sense of normalcy to their season.

Kershaw pitched eight shutout innings, lowering his major-league leading earned run average to 1.72, and driving in the only run he would need with an RBI single in the fourth inning. The Dodgers scored five more times against the Marlins for good measure, helped by doubles from five different players among their eight hits.

There was a point early in this series when the Dodgers looked mortal and Yasiel Puig looked immature, but that quickly passed. Having Zack Greinke and Kershaw on the mound on back-to-back days will do that for a team.

The Dodgers lost a game to the Colorado Rockies on June 1, a no-decision for Greinke, and lost again four days later with Kershaw on the hill against the Padres. They haven’t lost on both pitchers’ turns through the rotation since. If that trend continues into the playoffs, the off-season signing of Greinke and the many more dollars about to be spent on Kershaw must be considered worthy investments.

At this point Kershaw is chasing more than just money, more than a World Series ring, more than support for his charitable efforts that include an orphanage in Zambia and children’s organizations in Dallas and Los Angeles. (Which isn’t to say that being an outstanding humanitarian means less than being an outstanding pitcher — it doesn’t — although you can read all about Kershaw’s Challenge and disagree with me in the comments section below.) He’s chasing baseball immortality with each start by putting together a season that is greater than the sum of its eye-popping statistics.

I wrote a couple weeks ago about how he’s doing it. Not much has changed since then, though Kershaw struggled with his fastball command early in Thursday’s game and showed a level of resiliency that he hasn’t needed in a while. The other thing that’s changing is that Kershaw has gotten enough run support to be one off the NL lead in wins at 13-7. Didn’t see that coming a month ago.

Fact is, the longer Kershaw continues to pitch deep into games, win them, and force opposing managers to adjust their lineups, the more he bolsters his case for the National League Most Valuable Player award. By driving in Puig today, Kershaw added another merit to his MVP case: Since the All-Star break, he’s driven in five runs and allowed seven. Only one pitcher (Justin Verlander) has won the MVP award in the last 20 years. No left-hander has won it since Willie Hernandez in 1984, and no Dodgers pitcher has done it since Sandy Koufax in 1963. Only 24 pitchers have ever won an MVP.

The award is a mere opinion poll and should be treated as such, but for a pitcher to win one is special. To win one in the midst of several Cy Young-worthy years like Kershaw’s puts you in the conversation with the all-time greats like Koufax and Greg Maddux and Nolan Ryan and others. Are we to the point where Kershaw can only blaspheme against himself, like a young Tiger Woods?

That’s the question facing Kershaw with about five weeks left in the season, and it’s fascinating to see what the answer will be.

• The box score is here.

• Per ESPN Stats & Info, Puig’s fourth-inning double went 436 feet and Would have been a home run at 27 of 30 parks. Marlins Park, Minute Maid Park and Chase Field are the three exceptions.

• The Marlins have been shut out 15 times this season, second-most in the majors.

• The Dodgers did not commit an error in the series.