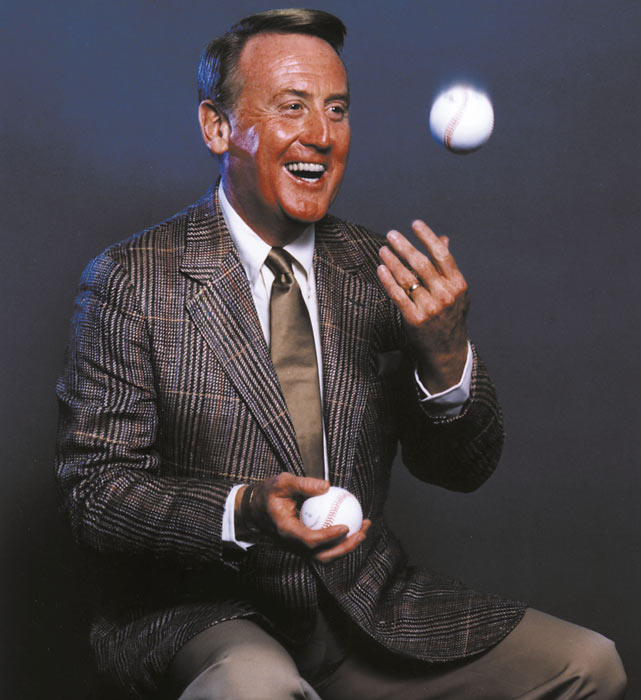 Vin Scully broadcast college football games before he began with the Dodgers in 1950. (Getty Images)

Not only was Vin Scully’s career launched at Fenway Park, he owed his big break to shutting up.

With the Boston media following the Red Sox into town on the same day Scully announced his return for a 65th season, the Hall of Fame broadcaster was asked about his night on the sidelines of a college football game on November 12, 1949, the year before he began covering the Dodgers.

Here’s what he recalled:

“What happened was, I had graduated that summer and I’d gotten a job with CBS in Washington, being the summer replacement announcer. As each announcer went on vacation I assumed all of his duties. When October, November came, everyone had been vacated and I was out of a job. But they offered a permanent job in February, I was thrilled. I sent a letter of introduction to the news director at CBS News. He lateraled me over to Red Barber because we had mentioned sports. Red was putting his hat and coat on; his wife was circling the block on Madison Avenue.

“There was a show called Football Roundup where CBS did four games. Not simultaneously, of course, but almost. They bounced from game to game. I think it was a newspaperman from Chicago was going to do one of the games. It was the North Carolina-Notre Dame game in Yankee Stadium. He fell ill. Ernie Harwell was transferred to do that game. I came home and my red-haired, very excitable Irish mother said, ‘Oh Vinny, you’ll never guess who called.’ I said, ‘Who Honey?’ And she said, ‘Red Skelton.’ I said, ‘No, I don’t think so. Red Barber?’

“Anyway, he said we want you to do this football game. Boston University and Maryland. Harry Agganis, who played a little first base for the Sox later, was the quarterback for BU. Being a young kid thinking ‘I’m going to be a network broadcaster, I’ll have a beautiful booth, I don’t need my hat or coat or gloves, it’s November,’ so I get there — there’s no booth. The engineer is sitting there on the 50-yard line on the roof of Fenway, where they rearranged it up there. He’s got a card table. He’s got his equipment on there and 50 yards of cable. I was doing the game, as the teams went up and down, I would go up and down on the roof with the microphone. I never mentioned anything except the game. Our game became a terrific game. I think Maryland won by two points.* They were the favorites. The Notre Dame-North Carolina game, Charlie Justice was an All-American. He was hurt. Notre Dame won easily, so they spent all the time with my game. When it was over, I was so cold, so unhappy. I thought I had this great break. I thought I blew it because I was unprepared for that. On Monday, Red got a call apologizing for putting his announcer under those conditions.

“Now, let’s say what was a very, very ordinary job, suddenly in Red’s mind was OK. ‘That kid never complained, never said anything.’ So he called me, said it was kind of tough. I said, ‘yessir, it was a bad day.’ He said, ‘don’t worry, you’ll have a booth next week. You’re doing Harvard-Yale.’ Wow. That was that. Then later, Ernie Harwell left. Red thought instead of hiring a professional, I’m going to take that kid. I’m going to see if I can make him a reasonably successful broadcaster.

“He had red hair. I had red hair. Years later, he wrote that I might have been the son he never had. There was a blessing in there somewhere. I went to spring training with the Dodgers, and 64 years later here I am. That’s the way it’s worked out.”

*According to the University of Maryland record book, the Terrapins won 14-13.