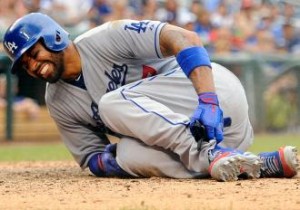 Kemp is scheduled to be the designated hitter in the Quakes’ 7 p.m. home game against the High Desert Mavericks.

“He passed all the tests,” Mattingly said.

Kemp sustained what’s believed to be a severe Grade 2 ankle sprain on July 21 in a game against the Washington Nationals. It was Kemp’s first game back after missing 15 days with inflammation in his right shoulder.

Wednesday was Kemp’s second straight day running the bases and making cuts in the outfield at close to full speed.

“It seems like it’s taken a while but we’re there. We survived,” Mattingly said. “Hopefully we get Matt sharp and it gives us options on our players.”

Kemp left without speaking to reporters after the game.