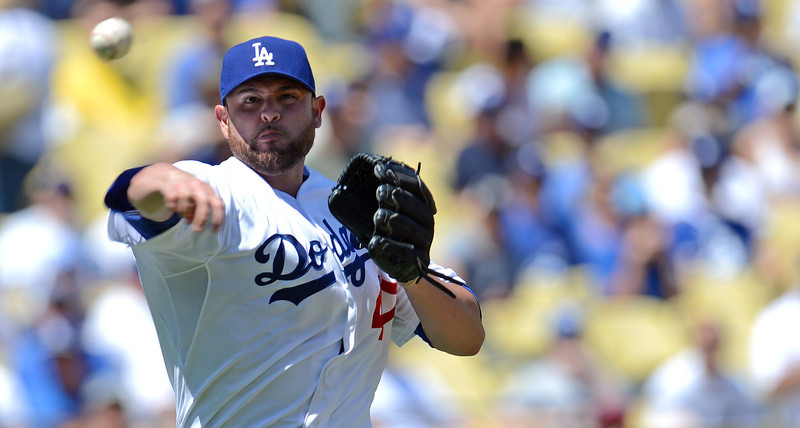 Ricky Nolasco‘s next start will be his 10th in a Dodgers uniform. If the last two starts are any indication — the right-hander has pitched 16 innings and allowed zero runs against the Red Sox and Cubs, respectively — he’s grown quite comfortable pitching for his childhood team in a short amount of time.

While some professional athletes simply aren’t able to deal with the unique pressures of pitching near their hometown, Nolasco has adapted well, improving incrementally with each outing. A free agent at the end of the season, Nolasco chose his words carefully Wednesday when asked if he’d want to re-sign with the Dodgers.

“My teammates have been doing a great job of welcoming me here,” Nolasco said after blanking the Cubs. “As far as what the future holds, we’re just going to have to wait and see what happens. I’m from here, and this is where I want to be. We’ll just see what happens.

“I’ll focus right now on winning right now and all that will play itself out.”

The key words there — this is where I want to be — were easily lost yesterday, when Yasiel Puig‘s benching was the media focus after the game. (More on him in a bit.)

Since Magic Johnson and his Guggenheim Baseball Management cohorts bought the club, the Dodgers’ new owners have gone out of their way to show they are choosers, not beggars. This winter, they potentially can choose from a free-agent pitching crop that includes Nolasco, Matt Garza, Phil Hughes, Tim Lincecum, Ervin Santana, A.J. Burnett and Jon Lester (for whom the Red Sox hold a team option worth $13 million). You can certainly argue that Nolasco, who turns 31 in December, isn’t the best pitcher in that group. He isn’t the worst. More importantly, would any accept the job of fourth starter more willingly, with lower contract demands, than the Rialto right-hander?

That question ignores the Dodgers’ plans for Josh Beckett, prospect Zach Lee, and Chad Billingsley, who’s due to return from Tommy John surgery at some point next season if his rehab goes well. (All three would love to have a permanent spot in the Dodgers’ 2014 rotation behind Kershaw-Greinke-Ryu.) But it’s a question that the Dodgers will have to ponder if Nolasco continues to force his way into the team’s long-term blueprints.

Some more bullet points for an off day:

• A sampling of takes on Don Mattingly benching Puig …

From FoxSports.com: “Mattingly gained respect in his clubhouse by benching Puig. Puig also gained respect … by taking the advice of several veterans and accepting responsibility in his postgame remarks to the media.”

From ESPN.com: “Mattingly has to be torn. On the one hand, he needs to keep one of the most talented young players in baseball happy and productive. That’s probably the top imperative. On the other, he has to show the other players on the team that he doesn’t have one set of standards for 24 of them and another set for one.”

From SBNation.com: “[The benching] means that [Puig] wasn’t paying attention, or wasn’t standing with his knees bent and ready to run when the pitch was thrown. Or maybe that he wasn’t shifting his position as instructed by the coaching staff. Could mean a lot of things, actually. But it seems unlikely that Mattingly is just making stuff up. Except for the part about (Skip) Schumaker giving the Dodgers a better chance to win, which does seem unlikely.”

From my predecessor: “It’s all on Puig now. We can no longer question whether Mattingly and [Ned] Colletti and the coaches and Puig’s teammates are too tolerant. The kid has been called on the carpet. Starting Friday, we will see how he responds.”

• Puig finds a new way to remind everyone of his presence each day. In Miami, he stole headlines on a scheduled off-day because he arrived late to the ballpark. Yesterday, he managed to get the opposing manager ejected by checking his swing enough to get the call on an appeal to the first-base umpire. (Dale Sveum argued the ruling that Puig didn’t swing, argued some more, and got to watch the rest of the game in a climate-controlled environment.) Then, after pitching his best game as a Dodger, Nolasco was forced to answer a bunch of questions about Puig getting benched. You try to take your eyes off Puig, and you can’t.

• When Matt Kemp joins Single-A Rancho Cucamonga today, he can help the Quakes clinch a California League playoff berth. They’re 1 ½ games ahead in the wild-card race with five games left in the regular season.

• In case you forgot, Dodgers head athletic trainer Sue Falsone still gets regarded as a hero, particularly in her home town of Buffalo.

• Remember that razor company that offered Brian Wilson a million dollars to shave his beard? There was no offer, Wilson says.

• We found this sentence sitting at the seedy intersection of Sports and Entertainment: “Harper, who turned 2 years old in July, was probably the coolest tot in the stadium, thanks to her Dodgers pacifier.”

• Thinking anyone gave a rat’s ass, I created a list of the top 64 songs of millennium last Friday. I desperately hoped that this song was released this millennium. I was wrong: