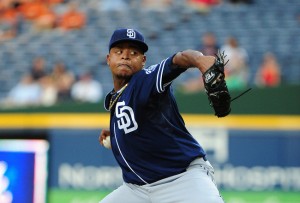 Edinson Volquez was 9-10 with a 6.01 earned-run average this season before he was placed on release waivers Wednesday by the San Diego Padres. (Getty Images)

Edinson Volquez was laughing Friday. Maybe it was nervous laughter; reading someone’s emotions can be difficult the first time you meet them.

The right-handed pitcher, who officially signed a one-year contract with the Dodgers on Friday, was talking about his last start seven days ago against the Chicago Cubs.

“Every pitch I threw, they hit them,” Volquez said. “I was surprised because I have good numbers against the Cubs. I saw my record agianst them, it was 5-0, 2-point ERA [actually 2.98]. I had a lot of confidence. Then in the first inning it was like six runs, five (earned) runs, in the first inning. It’s not good.”

San Diego Padres pitching coach Darren Balsley said that he “covered a lot of things” to get Volquez on track this season before the Padres finally requested unconditional release waivers on the pitcher Wednesday. The last start against the Cubs, in which Volquez lasted just two-thirds of an inning, left him with a 9-10 record and a career-high 6.01 ERA for the season.

“I think with Volqy he tries so hard, sometimes he tries a little bit too hard,” Balsley said. “He’s a really hard trier and good teammate. That got in his way here a little bit. He would overthrow. I don’t use that phrase very often, but the overthrow turned into a ball and it then it snowballed in some of his outings. When he was good he was good. When he struggled a little bit, which might have been the case, he tried too hard.”

Balsley said that Volquez’s tendency to overthrow never led to any physical injuries, which is good news for the Dodgers. Based on his pitch velocity, Volquez appears to be healthy.

In his best season of 2008 with the Cincinnati Reds, his fastball topped out at 98.4 mph and averaged 93.6. It’s declined steadily since, which is normal for any pitcher. This season Volquez’s fastball topped out at 97.0 and averaged 92.2. According to FanGraphs.com, Volquez threw the pitch less than 19 percent of the time this season, down significantly from seasons past.

Ask any pitcher and he’ll say that location is more integral to his success than velocity. Balsley said that Volquez’s fastball command “is better this year than it was last year — that’s why it’s a little surprising his whole body of work, his numbers aren’t better than they are.”

Maybe Volquez should have thrown the fastball more, but that’s for Dodgers pitching coach Rick Honeycutt to figure out.

On the surface, Volquez is a poor fit for the Dodgers, who have five starters plus Stephen Fife waiting at Triple-A. Volquez was the starter in all 27 of his appearances with the Padres, and the last time he pitched in relief came in the 17th inning of a game in May 2008. The right-hander allowed three runs and took the loss.

Rather than displacing struggling starter Chris Capuano, however, manager Don Mattingly said that he’ll try to find a spot for Volquez in the bullpen. Right-handed reliever Chris Withrow was optioned to Triple-A Albuquerque prior to the game to make room for Volquez on the Dodgers’ active roster.

“We have to get him on the mound in competition, and it’s got to be at the big league level,” Dodgers manager Don Mattingly said.

“After that we’ll see where it goes from there,” general manager Ned Colletti added.

For now, tinkering with Volquez’s mechanics seems less integral than tinkering with his mental approach. Honeycutt’s success in a short order should determine whether Volquez ever starts a game for the Dodgers or if he’s included on the club’s postseason roster, assuming the Dodgers are playing in October.

Balsley said that Volquez’s struggles would “start mentally then turn into physically because your mechanics break down. He had a little overstride in him. Quite frankly he’s been a little snakebit this year. He’s a lot better pitcher than the numbers show. He’s had a down year. Edinson is a quality major league pitcher.”