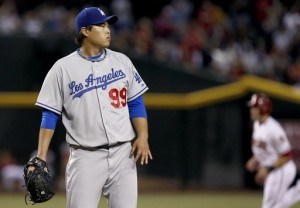 Hyun-Jin Ryu pitched a complete game for the first time since May. (Associated Press photo)

Nick Punto’s dad, Lou, was at Dodger Stadium last week prior to a game against the Arizona Diamondbacks. Lou Punto is a baseball coach himself, and he was sizing up the Dodgers. (I could imagine him doing the same thing for Nick’s 10-year-old Little League team, but that’s beside the point.) He particularly liked how many one-run games the Dodgers were winning — 22-17 through Sunday — and how that was a hallmark of veteran teams.

It was a one-run game when the Dodgers came to bat in the seventh, eighth and ninth innings in Phoenix on Monday. There were veterans galore, but this wasn’t the same team that Mr. Punto came to see a week ago. His son was leading off. A player making his third major-league appearance was batting eighth. The only run the Dodgers could generate came when Yasiel Puig drew a bases-loaded walk to drive in Hyun-Jin Ryu. The way Trevor Cahill was pitching, a bunt single followed by a three-base error seemed about as likely.

Slightly more likely was Matt Kemp coming off the bench for the first time in nearly two months and driving in the game-winning run in the ninth inning.

But even that didn’t happen Monday.

Kemp did come off the bench for the first time in nearly two months — since July 21, to be exact — and he did bat with the tying and go-ahead runs on third and second base, respectively in the ninth. Brad Ziegler got Kemp to foul off a couple sinkers, threw an 0-2 curveball two feet off the plate that Kemp watched, then threw another curve a little closer to the plate. Kemp bit. He missed, and the Dodgers had lost their second straight one-run game.

Suddenly, Kemp and the Dodgers are on the same page: When will the player and the team look like their old selves again?

And when will the Dodgers clinch the National League West? They can still do it this series if they win their next two games, but their magic number remained stuck on four.

The waiting game and the clinching game aren’t as fun as good ol’ fashioned baseball.

Ryu pitched eight innings, the longest he’d lasted in a game since May. His control and his efficiency were remarkable, 61 of 100 pitches going for strikes. So was his pace. Arizona needed only 2 hours, 31 minutes to wrap this up. After giving up 10 hits in six innings against the Diamondbacks a week ago, and having his previous start scratched because of back problems, Ryu may have edged himself ahead of Ricky Nolasco in the contest to determine who pitches after Clayton Kershaw and Zack Greinke in the Dodgers’ October rotation.

That was a more important takeaway Monday than anything the won/loss column will show — that, and Juan Uribe can’t bunt.