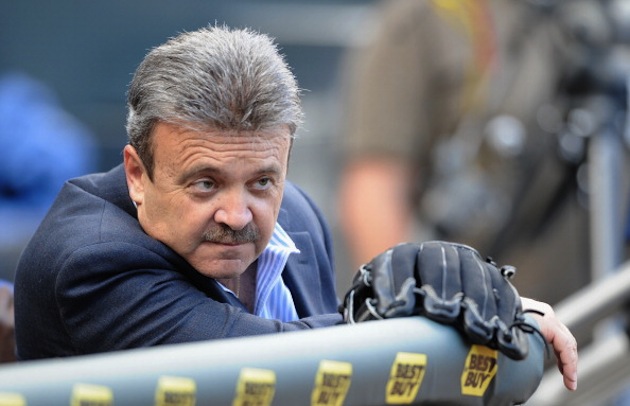 Dodgers general manager Ned Colletti has grown his analytics department from 1 to 4 since taking the job in 2006. (Getty Images)

We don’t know how large the Dodgers’ analytics department was in Paul DePodesta’s final days as general manager. It was almost certainly larger than 1, the number of people exclusively assigned to the task when Ned Colletti took over in 2006. And that one person, Colletti said, left two months into his tenure.

I briefly touched on this subject in today’s story about the Dodgers’ changing philosophy for the amateur draft, and what it might mean for their winter free-agent pursuits. The Dodgers have a four-person analytics team now, headed by Director of Contracts, Baseball Research and Operations Alex Tamin. Doing research for the story, I asked Colletti how the department grew from one to four:

We started an internship program. It just so happened that we brought interns in with a very strong analytical background. We just continued that process. … Analytics became a more valuable resource to your decision making. We had interns that had that type of approach, and we recognized the increased value of a more well-rounded approach to the acquisition process. As the interns graduated from college, we started to hire them as full-time employees.

I seek as much information as I can. If you evaluate only through scouting and what people see, you’re not fully utilizing what’s available to you. If you just use analytics, you’re not using what’s readily available to you. Just using analytics would be the same as hiring an executive with a high salary on (only reading) a resume. You need both at a strong caliber of evaluation to give yourself a better-percentage chance.

I think there’s great value in both. I don’t think you can do the process fairly without using both.

This is a topic I’ve touched on before, but as the amount of baseball data continues to explode, it’s worth revisiting periodically to see how the Dodgers keep up with the data explosion. Colletti said he recently had one scout, and one person from his analytics team, advising him simultaneously while making a decision on a player acquisition. Similar scenes will probably play out in the coming weeks and months.

Some bullet points for a Tajikistan Constitution Day:

• The Dodgers hired an advance scout.

• Yasiel Puig‘s reckless driving charge was dropped in Tennessee, and his good behavior in Los Angeles apparently helped. The view from San Francisco:

• One of the Blue Jays scouts who helped identify Michael Young out of UC Santa Barbara has died.

• Get a good look at this picture of the Astrodome. The next might feature an implosion.

• Want a retweet? Pretty simple, send me a cup of Starbucks coffee.

• Not a baseball link, but after reading this I’m not sure whether to be proud or ashamed if no UCLA football player has ever been bullied in the NFL.

• The Reign of Kindo is playing in Los Angeles tonight. I missed the historic lunar eclipse last December; I won’t miss this.