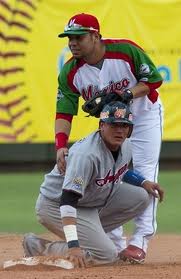 Omar Vizquel was a good-fielding, no-hit shortstop in 1992 when Bart Simpson traded his ripped-up Vizquel card to his friend Milhouse for a pristine Carl Yastrzemski card.

Twenty years later, when Vizquel retired at age 45, he was considered one of the best-fielding shortstops of all time — and he had 2,877 career hits to his name. After being born with the ability to field the ball, it was Vizquel’s evolution into a switch-hitting singles machine that allowed him to play 24 major-league seasons.

Vizquel was hired as the Detroit Tigers’ first-base coach in November after serving as a roving instructor in the Angels’ system last year. He spent the winter coaching for Caracas in the Venezuelan Winter League.

When Miguel Rojas, the Dodgers’ slick-fielding infield prospect, met up with Vizquel in their native Venezuela, their conversation focused on hitting.

“He just told me what helped him to be a better hitter and get almost 3,000 hits in the big leagues,” Rojas said last week at the Dodgers’ winter development camp. “That’s what I want to learn, because I know he’s already a great fielder, Gold Glover, so I want to be as good as him.

“He told me this story that he was just a right-handed hitter, and then he learned how to hit left-handed late, and then when he started hitting left-handed, he understood what kind of player he was, as an offensive part. That’s one of the big pieces of advice he gave to me: learn who you are as a hitter. That’s an important thing in this part of your career.”

Given those numbers, it came as some surprise when general manager Ned Colletti said that Rojas would be in the mix for major-league at-bats in spring training as the Dodgers sort out their candidates to play second base.

“Miguel Rojas will get a good look,” Colletti said. “He’s an excellent defensive player. He’s played more shortstop than he has any place else, but we’re expanding that. … I think he’s game for the situation. I think he wants that opportunity. We’re going to give him that chance.”

Alexander Guerrero is the leading candidate to start at second base on Opening Day. Dodgers management was hoping to see more in winter ball of Guerrero, who signed a four-year contract in October, but a recurring hamstring injury limited him to 12 games in the Dominican League. Guerrero, who established residence in Haiti last year after defecting from Cuba, still hasn’t been able to come to America as he awaits a visa. So the competition is somewhat open.

For Rojas, hitting major-league pitching seems to be the only obstacle.

“He’s an unbelievable defender,” pitcher Zach Lee said of his Chattanooga teammate. “He’s got some of the best hands I’ve seen. He’s a great guy on and off the field. He speaks really good English. He took that role on to be a mediator — if you wanted to speak to a Spanish-speaker, he was the translator.”

The origin of Rojas’ slick hands has a mythological quality to it.

“When I was little, I always took more groundballs than hits. That’s why I’m a better defensive player than a hitter,” he said. “That’s not an excuse. When I was in Venezuela when I was little, the fields [were] not as good as they are here in the States. I was taking groundballs on the rocks. I think that’s one of the things that helped me as a defensive guy.”

Some bullet points for a Korean American Day:

• According to baseballamerica.com, three minor leaguers won’t be back with the Dodgers next year: RHP Ricardo Perez, C Dimitri de la Fuente and 1B Jake Chaplin.

• I’m late to this party by a couple weeks, but there need to be more Christmas hip hop tunes: