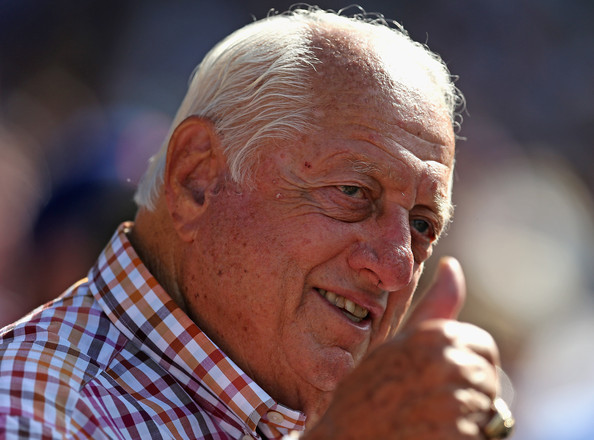 Tommy Lasorda was in rare form Saturday night. He publicly introduced a member of the San Francisco Giants.

Lasorda has spent 64 seasons in the Dodgers organization in some capacity or another — pitcher, manager, general manager and advisor, his current title. “If you don’t root for the Dodgers, you might not get into heaven,” is among his oft-repeated quotes. He’s embraced — even embodied — half of the Dodgers-Giants rivalry for his public persona. Lasorda has some oft-repeated quotes about the Giants too, but this is a family blog.

So it was interesting to see Lasorda on Saturday night at the Professional Baseball Scouts Foundation dinner in Beverly Hills, introducing the latest recipient of the award named in his honor: San Francisco Giants manager Bruce Bochy.

“It’s very unusual,” Lasorda said. “When I said my prayers last night, first of all I asked God for forgiveness. I said: Dear Lord, I’m going to have to give a trophy to a Giant. The good Lord said, ‘Tommy, the guy you’re going to honor is great. Outstanding manager. A manager that has been so successful, well-liked, nice, easy-going guy. For me to allow him to receive the Tommy Lasorda award, you know there’s something wrong in his dinner tonight.’

Lasorda continued: “It gives me a great deal of pleasure to introduce the man who has led the Giants to two World Series in the last five years. Ladies and gentleman, my good friend” — the 86-year-old paused, pointing toward heaven and sending the packed room into laughter in one motion — “Mr. Bochy.”

If Lasorda hadn’t totally brought down the crowd, Bochy knocked ’em over with the last word.

Turning toward Lasorda, Bochy said, “you were my great-great-great grandmother’s favorite manager, you know.”