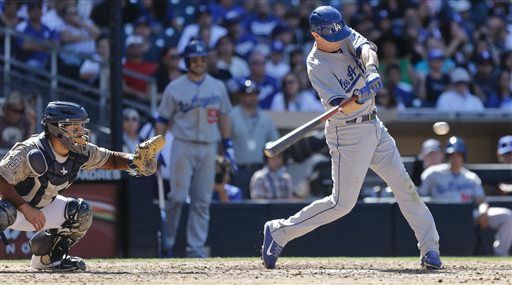 Michael Young batted .314 in 21 regular-season games with the Dodgers, and collected one hit in 10 postseason at-bats. (Associated Press photo)

Veteran infielder Michael Young has decided to retire rather than return to the Dodgers, ending a 14-year major-league career.

The 37-year-old native of Covina was mulling a one-year offer to re-sign with the Dodgers. At a charity bowling function on Sunday in Anaheim, Young sounded eager to play his natural second base position in a utility role, but also acknowledged that family was his first priority. Young and his wife live in Dallas with their three children.

“I’m going through every possible option with my family,” he said Sunday. “I’m not going to hold out as long as possible.”

Young played most of his 1,970 career games with the Texas Rangers, whom he helped lead to the World Series in 2010 and 2011. Young was traded to the Philadelphia Phillies in December 2012, then to the Dodgers at the 2013 trade deadline.