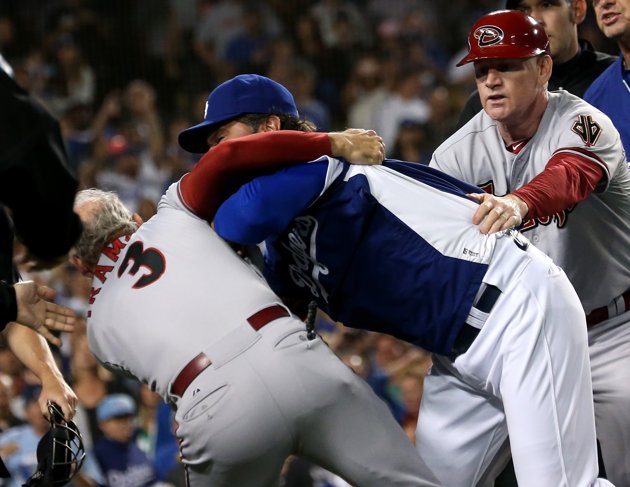 The Dodgers’ early-season schedule has the potential to frustrate manager Don Mattingly, who isn’t above taking out his frustration on Arizona Diamondbacks coaches. (Getty Images)

So the Dodgers and Diamondbacks play two games in Australia a week before any other team begins its regular season. Does anything about this arrangement make Don Mattingly‘s job easier?

Maybe a little. If he wants to, the Dodgers manager can have reigning National League Cy Young award winner Clayton Kershaw start a game in Sydney, then the U.S. regular-season opener seven days later, then the Dodgers’ home opener five days after that. Again: if he wants to.

Things start to get tricky, um, everywhere else. Start with the bullpen.

“If you think about it,” Mattingly said Saturday at the Dodgers’ FanFest, “you’re going into two games in a row (in Australia), you’ve got to kind of save your relievers as you get into that. Then if you don’t use them, now it’s going to be a week or 10 days before they’re throwing in a (regular-season) game.”

As of right now, the Dodgers have exactly one game on their schedule between March 17-21, a time when many managers have the luxury of split-squad games to evaluate players pushing for the final spots on their 25-man roster. That one game is an exhibition against the Australian national team in Sydney on March 20. Two days later, the Dodgers and Diamondbacks will celebrate Opening Day.

After the Dodgers play the D-Backs on the afternoon of March 23, they get four days off to fly back to Los Angeles and re-adjust to Pacific Time. All that time off down the road has a ripple effect on players’ routines. Pitchers are hit the hardest.

“These guys are having to throw bullpens before we even get to camp,” Mattingly said. “That seems like a rush to me.”

Don’t expect the three-game Freeway Series against the Angels, on March 27-29, to have the usual look of a “final audition” for roster spots — at least as relief pitchers are concerned. Mattingly said he’ll have to manage his bullpen with an eye toward the March 30 game in San Diego that counts in the standings.

The Dodgers’ position players can’t exactly treat the Freeway Series like an exhibition, either. In a usual year, Mattingly might use those games to rest his projected starting lineup. The quirky schedule makes this year different.

“Starting the season and then not playing for another eight days always bothers me,” Mattingly said, “because once guys turn that clock on, it’s hard to get them to play an exhibition game. That’s where you start to get bad habits. You start the season then it’s like these games don’t count. Guys, they know that. They know that game, the stats don’t count. I worry about bad habits during that period of time.”

The Freeway Series games are scheduled for March 27 and 28 at Dodger Stadium and March 29 at Angel Stadium.

Some bullet points for a Four Chaplains Day:

• “I’m both surprised and honored to be selected to the Canadian Baseball Hall of Fame,” Wallach said. “What a great thrill to be going in with such integral parts of the Montreal Expos for such a long time, and to join many of my old teammates and manager, along with so many people that meant so much to Canadian baseball. This is a great honor for my family and myself.”

• In recent years, Wallach has been inducted into the Cal State Fullerton (his alma mater) Titan Athletics Hall of Fame (2005) and the College Baseball Hall of Fame (2011).

• MLB.com ranks the Dodgers’ rotation as the second-best in baseball.

• ESPN.com predicts Josh Beckett could be the next A.J. Burnett (at least, one of the next Burnetts).

• SI.com credits the Dodgers with two of the best February free-agent signings of the last five years. Guess who.

• ThinkBlueLA.com thinks about the Dodgers’ new season-ticket prices and policies, and delivers a poor verdict.

• Happy 34th birthday to Skip Schumaker. Former Brooklyn Dodger Joe Stripp was also born on this day in 1903. Stripp is famous for cracking his knee while being chased by Leo Durocher with a bucket of water.

• Today is the 55th anniversary of the most famous plane crash in pop music history. Here’s a 21-year-old Buddy Holly playing Peggy Sue live in 1957: