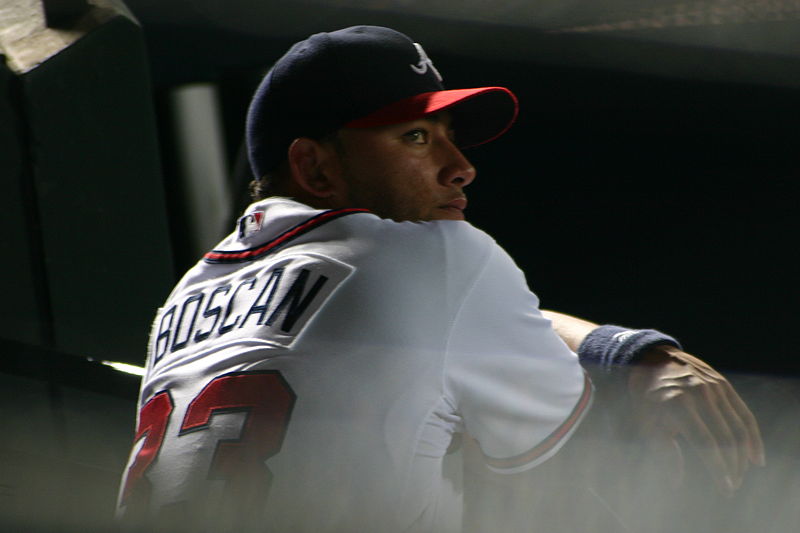 Catcher J.C. Boscan, a non-roster invitee in Dodgers camp, said his parents have been deeply affected by the food shortage in their native Venezuela. (Wikipedia image)

GLENDALE, Ariz. — Earlier this week, Miguel Rojas spoke at length about his concerns for his wife and family back in Venezuela. The 24-year-old minor leaguer received an invitation to the Dodgers’ major-league camp for the first time this year. While he’s trying to focus on baseball, his attention is justifiably divided by the ongoing protests in Venezuela.

The Tigers’ Venezuelan contingent recently took to Twitter to show their support for their homeland; at least five other teams have done the same thing since. FoxSports.com spoke with a number of Venezuelan natives attending the San Francisco Giants’ camp. That’s a good read if you can spare 5-10 minutes.

Earlier today, Venezuelan president Nicolas Maduro reportedly blamed major-league owners for pressuring Venezuelan players to show their support. The Dodgers only have two Venezuelan natives in camp: Rojas and 34-year-old catcher J.C. Boscan, also a non-roster invitee. Neither has been pressured by Dodgers ownership to give an interview.

He said that his parents run a restaurant in Maracaibo, a city in northwest Venezuela near the Colombian border. Since last year they have been deeply affected by the nationwide food shortage, which has been one of the main causes for protest.

“They understand the protests,” Boscan said. “It gets tough for them when they try to get something for the restaurant and they can’t find it.

“Every day that goes by it gets worse. They used to be able to go to one store. Now they need to go to 15 or 20 stores. You lose time like that.”

The Colombian border is 70 miles away. However, Boscan said that buying food in Colombia isn’t a practical solution for his parents because they would lose money due to the currency-exchange rates.

Many of the protests in Venezuela began among college students. Boscan said his house in Maracaibo is next to a private university. He knows that his neighborhood has been busy, but specifics have been hard to come by. The government has reportedly stifled independent news outlets within the country, and even blocked its citizens from posting photos of the protests on Twitter.

“The only reason I know is because my parents told me,” said Boscan, who doesn’t have a Twitter account. “That’s the only way to find out.”

Like Rojas he is advocating peace, hoping that Maduro’s allies and the protesters can somehow find middle ground.

“Something bad is going on,” he said.