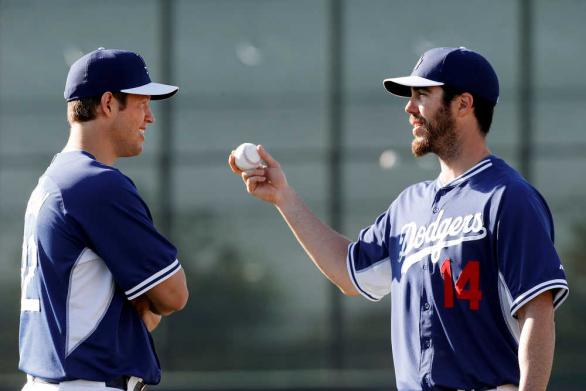 Clayton Kershaw (left) and Dan Haren (right) figure to be on the plane to Sydney, Australia to begin the 2014 regular season. (Associated Press photo)

GLENDALE, Ariz. — A scrum of reporters was gathered in one corner of the clubhouse Monday, surrounding a player with questions that had nothing do with Sydney, site of the Dodgers’ regular-season opener March 22. Once the questions and answers stopped, the player tacked on three words with a poo-eating grin: “I love Australia!”

Earlier, pitcher Dan Haren was asked about being on a short list of pitchers who might start one of the Dodgers’ season-opening games against the Arizona Diamondbacks.

The fallout from Zack Greinke‘s candid comments about beginning the season in Australia was ringing loud and clear in the clubhouse Monday. Greinke told ESPN.com Saturday that “I would say there is absolutely zero excitement for (the trip). There just isn’t any excitement to it. I can’t think of one reason to be excited for it.”

Haren wouldn’t go that far. He has orders not to. But he articulated a few more practical concerns about the trip Monday.

“Going over there, it’s going to be tough but we have to think of the games as real regular-season games. We have to turn the switch on,” he said. “In regards to the actual trip, it’s going to be a lot to handle, especially for the starting pitchers making the trip. But are we really complaining about flying a charter plane, staying at a hotel, all-expenses paid? I really don’t want to be complaining about it.

“That’s a lot to ask for the players, but I think everyone understands why we’re doing it. We’re trying to build the brand, I guess. We just have to welcome it I guess.”

Dodgers manager Don Mattingly has not said who will start the two games. He’s said that five starters might be too many to bring for two games, so the top four — Clayton Kershaw, Greinke, Hyun-Jin Ryu and Haren — figure to be on the plane.

“We don’t really know who’s pitching or anything yet,” Haren said. “It would really stink to fly 30 hours and not pitch, I guess. I really don’t know what my role is going to be there.”

Kasten said Sunday afternoon that he had not been approached by organizers of the Australia games. The Sydney Morning Herald reported that this might change.

Haren doesn’t want to give the Australians anything more to complain about, and not because he fears a public booting.

Some bullet points for a Mexican Flag Day:

• If Adrian Gonzalez, Hanley Ramirez, or two or three pitchers in the Dodgers’ rotation suffer a long-term injury around the first week of June — not a far-fetched scenario — Kendrys Morales, Stephen Drew and/or Ervin Santana might still be available. FoxSports.com explains.

• The Baseball Reliquary is presenting a collection of 54 paintings by artist Ben Sakoguchi, including “Chavez Ravine Brand” (2005), pictured below, at the Arcadia Public Library. The exhibition runs from March 4 to April 29. 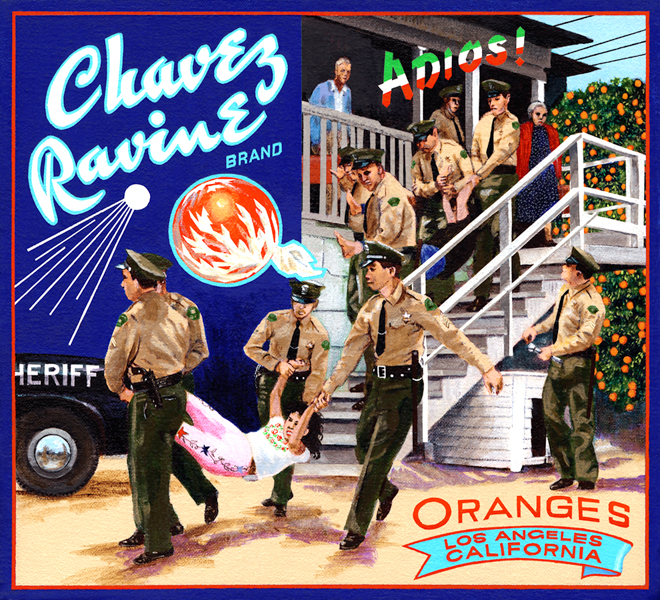 • Remember the name Kenta Maeda. He’ll be the next pitcher from Japan that every MLB team wants to sign. A scouting report is here.

• Former Dodgers reliever Ronald Belisario is having visa issues, and his new manager is questioning whether Belisario will be ready for the season.

• “Nature’s Way” was reputedly written in an afternoon when Spirit was playing at the Fillmore West in San Francisco. Drummer Ed Cassidy has a light workload but milks every note on the timpani (I think it’s a timpani, and I think it’s Ed) to its full, haunting effect: