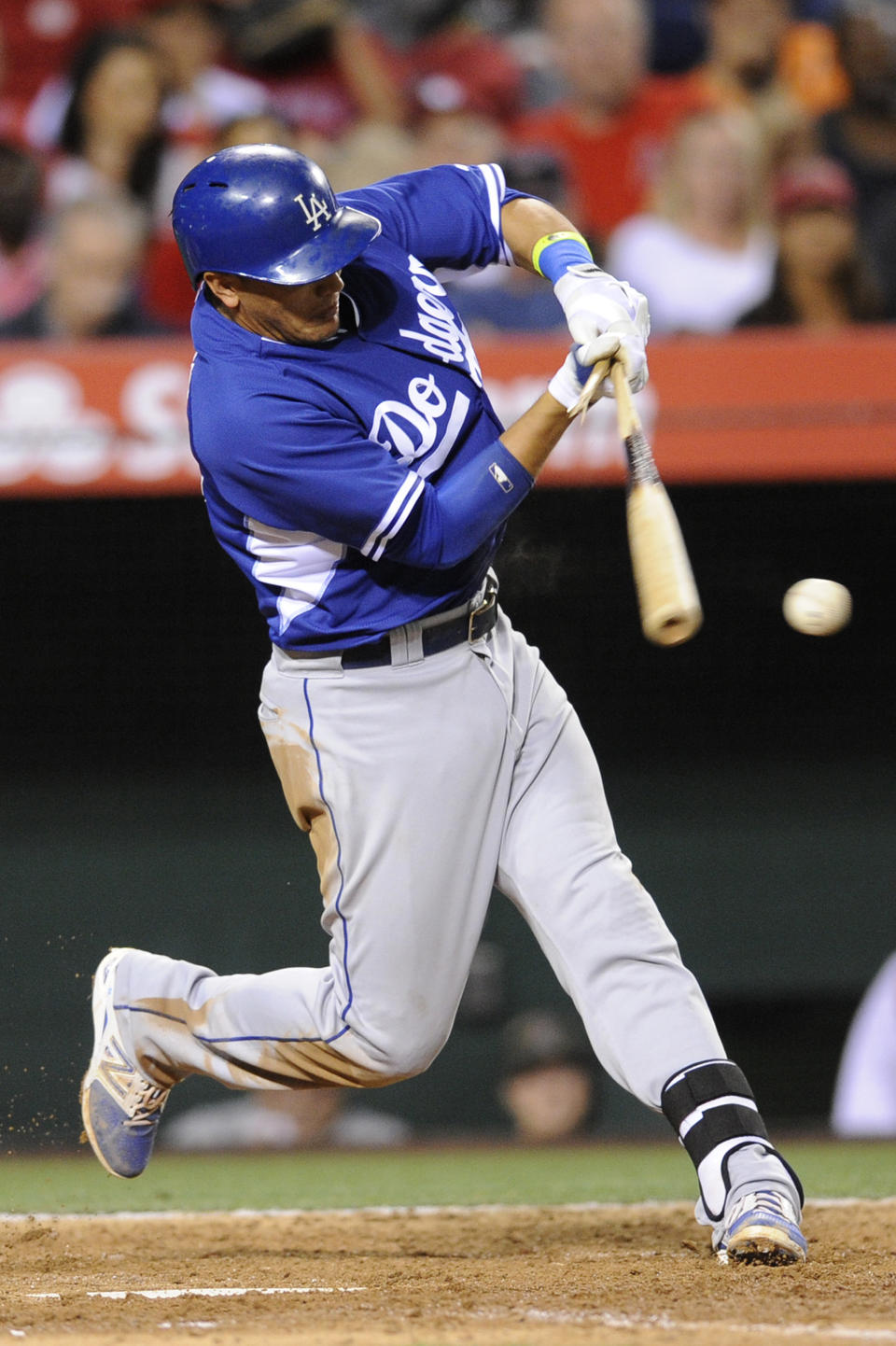 Miguel Rojas, who grounded out on this at-bat Saturday, finished spring training with a .387 batting average, second on the Dodgers to Justin Turner’s .389. (Associated Press photo)

ANAHEIM — Dan Haren‘s final spring tuneup was one to forget.

The right-hander allowed all six Angels runs in a 6-2 Dodgers loss before an announced crowd of 43,553 at Angel Stadium on Saturday.

The Dodgers resume regular-season play tomorrow in San Diego. It’s the Padres’ first game of the season. Opening Day for most major-league teams is Monday.

Last weekend, the Dodgers beat the Arizona Diamondbacks twice in Sydney, Australia and have a regular-season record of 2-0. They came back and lost two of three to the Angels, officially finishing spring training with a 7-12-5 record.

Haren didn’t go to Australia. Since the Dodgers only needed two starting pitchers (and kept Paul Maholm for insurance), Haren stayed behind and pitched minor-league spring training games in Arizona.

The playing environment changed dramatically Saturday. Haren went from games with no official statistics and no names on the back of players’ jerseys to a sold-out stadium. The change seemed to have caught him by surprise.

Trout’s home run came on a hanging split-fingered fastball, Haren said, while almost all of the Angels’ other hard hits came off his cut fastball. Haren allowed six hits in two innings.

“It was just kind of getting it a little bit flat,” Haren said of his cutter. “I have to have the mindset of driving it down and away to a righty rather than just leaving it out there.

“I’m going to throw quite a few of them in the bullpen. I need to get that sharpened up. My other pitches were actually OK. I struggled with it last start too in the minor leagues. I threw a bunch in the last inning of that game.”

Haren starts Wednesday in San Diego, the finale of the three-game series with the Padres. His final major-league spring training ERA: 6.00.

“It’s the last one that doesn’t count,” Haren said. “No use thinking about it too much. I got some work in. It’s been a while since I felt like I’ve been on a mound, it seems like, at least in a real game. It didn’t turn out the way I wanted it to. I feel OK. Just flush it down and move on to the next one.”

The Dodgers scored both of their runs in the third inning on a two-run double by Chone Figgins. Most of the starters played only two defensive innings.

It was a good day for the Dodgers’ bullpen. Against almost entirely major-league competition, they combined for six scoreless innings: One by Brandon League, three by Matt Magill and two by Red Patterson.

• Mattingly praised League’s effort in the third inning. The embattled right-hander retired Freese on a groundout, Raul Ibanez on a flyout to the deepest part of the stadium (just right of center field), allowed an infield single to Howie Kendrick on a slow roller to third base, and struck out Chris Iannetta looking.

• There were no major injuries, so there are no changes to report for Dodgers’ probable Opening Day roster (first reported here).

• On the Dodgers’ re-adjustment to North America, Mattingly said, “I’m OK with it. We seemed to be back on our feet with the time adjustment and we played with decent energy.” The Dodgers are trying to avoid the April fate of the 2004 New York Yankees club that began its season in Japan. That year, the Yankees and Tampa Bay Rays split a pair of games in Tokyo, then had five days off before resuming the regular season in Tampa. The Yankees needed nearly a month to get back over .500, but wound up winning 101 games.