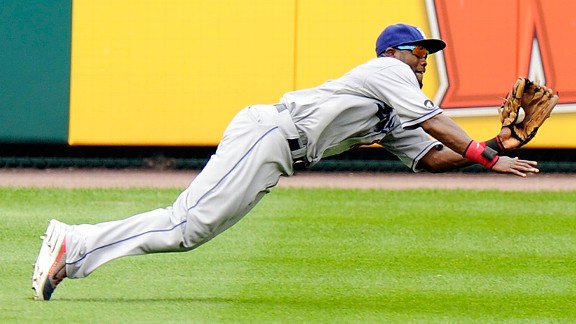 Some bullet points for a Grounation Day:

• In other former Dodgers outfielder news, Bobby Abreu is back with the Mets.

• If Guerrero keeps up that pace, Chone Figgins‘ job is in jeopardy. Throughout March, the Dodgers praised Figgins’ versatility in the field and patience at the plate. Yet through 19 games, Figgins has played just two-thirds of an inning in the field (both in left field) and made only nine plate appearances. By cutting Figgins, the Dodgers wouldn’t be losing much production.

• Next, SportsNet LA will use DirecTV subscriber A.J. Ellis in its ads:

ICYMI: @SportsNetLA using Vin Scully in its ads is Vinsulting,Vinfuriating,Vinsensitive … no vindication. pic.twitter.com/XBYAcjCbII

• The secret to Zack Greinke’s slider? He stopped throwing a cutter.

• According to ESPN Stats and Info, Juan Uribe ranks sixth in MLB in hard-hit average, ahead of Mike Trout, Paul Goldschmidt and Albert Pujols.

• MLB commissioner Bud Selig is often criticized for publicly paying lip service to a problem in the game, while privately dragging his heels on solving the problem. (Oakland A’s ballpark, drug testing in the 1990s, introduction of video replay in the 2000s, et. al.) He won’t even pay lip service to the problem of human trafficking infiltrating the game, writes Jeff Passan of Yahoo! Sports.

• MLBfarm.com created this map of where every American-born major leaguer was born by county.

• Dodger batters are leading the major leagues into a new frontier of striking out a lot. (Pitchers are getting their share of whiffs, too.)

• The production value on “Season Song” by Blue States is through the roof. The electric guitar is cast as a rhythm instrument; the backup vocals sound as if they come from a church choir; a wah pedal makes a couple memorable cameos; strings soar; a drumbeat is lifted from the James Brown catalogue: