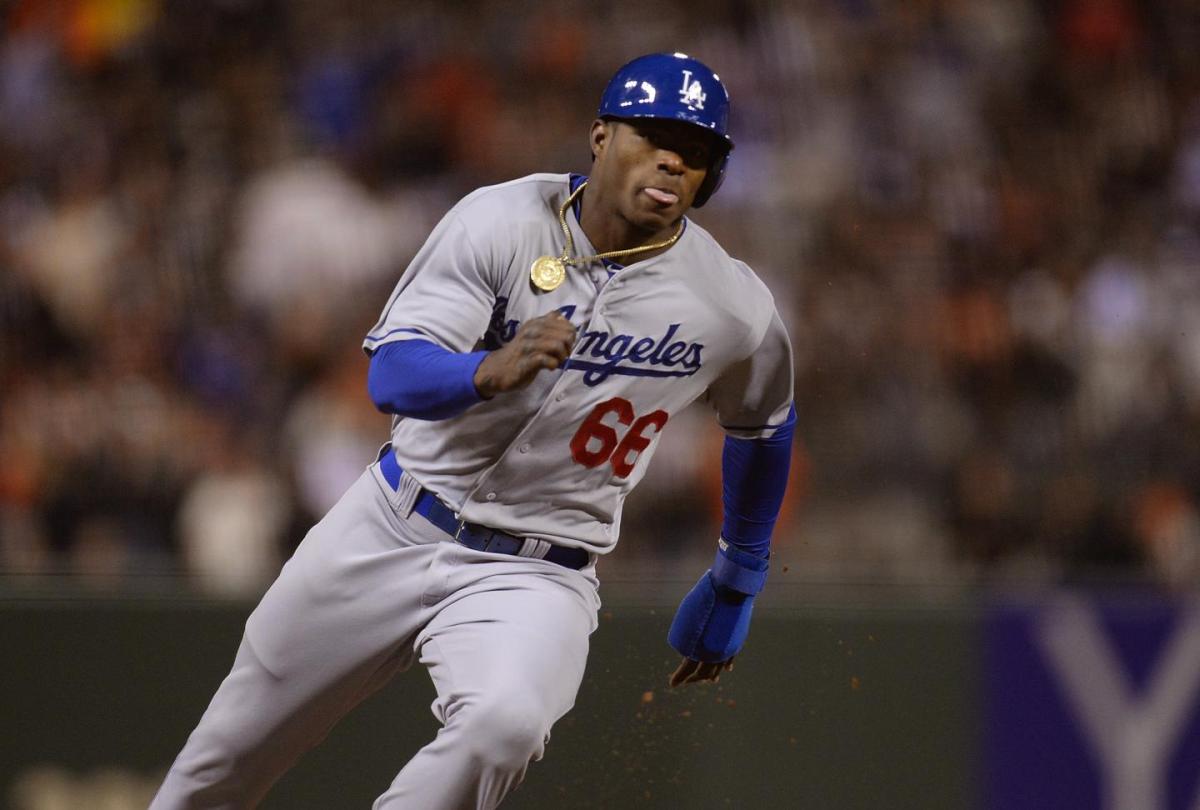 Yasiel Puig has been thrown out on the bases seven times this season. (Getty Images)

The Dodgers have seen 15 runners thrown out on the basepaths this season. That’s two fewer than the Colorado Rockies and St. Louis Cardinals in a statistical category that no team wants to lead.

Yasiel Puig is single-handedly responsible for seven of those misfortunes, tied with Pittsburgh’s Starling Marte for the MLB lead. Puig was doubled off first base in the first game of Thursday’s doubleheader in Minnesota. Umpire Tim Welke had a good look at the play from his vantage point at second base. Welke had an even better look at this play in the night game (from Yahoo.com):

With one out, Puig beat out a chopper up the middle that second baseman Brian Dozier threw in the dirt to first base. Chris Colabello couldn’t pick it and the ball hopped past him, with catcher Yosmil Pinto backing up the play. After he ran through the bag, Puig sharply turned his head to the right to check for the ball’s location. It was evident from Puig’s body language that Puig wanted to take an extra base, but when he saw Pinto with the ball, he applied the brakes. If Puig’s left shoulder began to dip toward second, the rest of his body actually leaned right. He never left the baseline, never crossed the foul line. He stopped, turned around clockwise (that’s away from second base), and started walking back to the bag like an innocent man who just had hit an infield single.

When Pinto tagged Puig, Welke signaled that Puig was out. Was that the right call? Judge for yourself.

The Yahoo! article suggested that Welke “seemed to be looking for a reason to call Puig out.” Without interviewing Welke, a veteran of 29 major-league seasons and the crew chief last night, it’s impossible to know that for sure.

Psychology tells us that there might have been a very real phenomenon at work. It’s called the confirmation bias and we’re all susceptible to it at some point, on some level. Reading further into the well-sourced Wikipedia entry on the topic, “even if people gather and interpret evidence in a neutral manner, they may still remember it selectively to reinforce their expectations.”

A player who’s already been thrown out on the basepaths six times in a month (Puig) can be reasonably expected to make the same mistake again. Puig’s mistake in the first game might have reinforced that expectation for everyone in the ballpark, including the second-base umpire. Given a split second to make his call at first base in the second game, Welke could easily have fallen prey to confirmation bias. That’s not an opinion — that’s a real possibility, reinforced repeatedly in scientifically valid experiments. Welke might not have been aware of a possible confirmation bias at work in his own mind. Even if reporters were given the chance to interview him after the game, the interview might not have cleared up the question.

Here’s what we do know: The more outs he runs into, the more Puig hurts his chances of getting the benefit of the doubt in situations like the one Thursday night in Minnesota.

Thursday was still a good day for Puig on the whole. The Elias Sports Bureau (via ESPN) said that Puig is the first Dodgers player to reach base eight times in a doubleheader since Bill Buckner against the Giants in 1976.

Some bullet points for a Baby Day:

• ESPN announced that the Pirates-Dodgers game June 1 at Dodger Stadium has been selected for Sunday Night Baseball, a 5 p.m. start time.

• From MiLB.com: “Joc Pederson‘s statistics through the first month of the season are impressive enough, but it’s what he did on the final day of April that suggests he’s only scratching the surface of his talent.”

• The Dodgers are one of baseball’s slowest teams, in large part because of so many late-inning pitching chances. The Red Sox are studying the issue of game length.

• In the wake of Donald Sterling, remembering Al Campanis.

• A related piece on FanGraphs.com: “The MLB Constitution gives the Commissioner broad authority to fine, suspend and remove owners who act contrary to “the best interests of baseball.” In the NBA, the Commissioner can fine and suspend (but not remove) an owner…”

• Now, suddenly, we can watch the 1919 World Series (and decide for ourselves who was tanking).

• Major League Baseball rearranged its investigative unit, laying off three of the principals responsible for digging up dirt on Alex Rodriguez.

• If you know nothing about advanced defensive statistics in baseball, this is a good read.

• I believe “Can I Kick It” is a new instrumental hip-hop track, but it sounds deliciously old school: