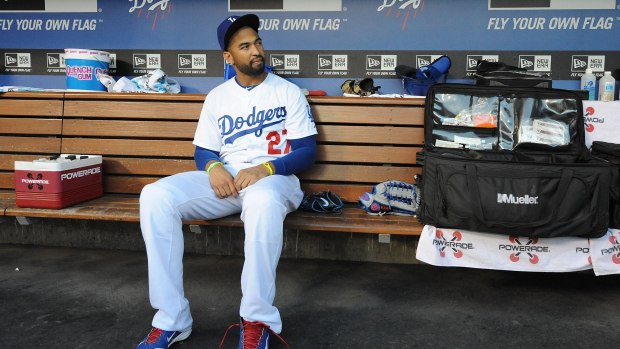 Therein lies the basis for a closed-door meeting Saturday between the two that didn’t thrill Kemp. Who would be thrilled to learn they’re being benched?

Asked Monday if the meeting was helpful or productive, Kemp said, “yeah, any meeting can be productive. He told me what he planned on doing. It is what it is.”

So what is the plan?

According to Mattingly, Kemp is being groomed to play left field (but not exclusively) while Carl Crawford handles left field and Andre Ethier takes over in center. Kemp was scheduled to take fly balls in left field prior to Monday’s game against the Cincinnati Reds.

But the Dodgers are less concerned with Kemp’s bat — he’s hitting .264 with five home runs — than his defense.

“We’ve still got to go back to him getting to 100 percent,” Mattingly said. “We don’t feel like he’s moving the way he did a couple years ago. We still feel like maybe physically he is back because he isn’t on the medical report but you see the steps sometimes, he doesn’t really want to stop hard. Maybe that’s getting over that little fear of the ankle where it’s at. This gives him more time to be able to get to where we feel he’s 100 percent, continue him to work in center but also work in left field which we feel is best for the ballclub at this moment.”

Kemp was forthcoming about his frustration.

“I’m here to play baseball, I’m here to try to help my team win any way possible,” he said. “I’m healthy, man. I feel good. I just want to play.”

Asked if he feels he’s being treated unfairly, Kemp said “it doesn’t matter what I think. I just want to go out and play baseball. That’s what matters.”

In one sense he’s right: Mattingly makes out the lineup card. It doesn’t matter what Kemp thinks. And Mattingly thinks Kemp is moving at less than 100 percent at a time when the Dodgers can get better defense from Crawford and Ethier.

The manager has heard this tune before, and not just from Kemp.

“I can talk personally from coming back from an injury, even though you’re out there feeling 100 percent, there’s still doubts in your mind at times,” Mattingly said. “What can I withstand? How much work can I do? That’s always the barrier for me with guys — not just Matt but anybody coming back from injuries. You know you have to work to get yourself back in order, but if you do too much work does that set you backwards?