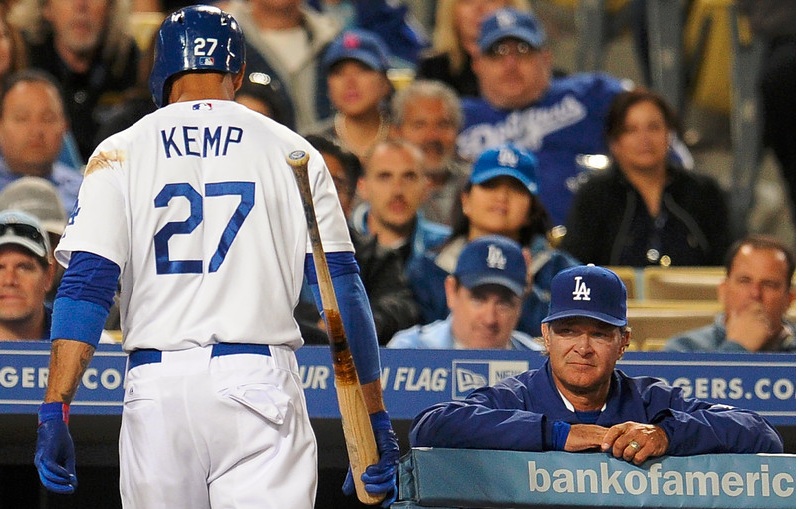 Don Mattingly and Matt Kemp had diverging opinions Monday about Kemp’s health, and that storyline isn’t going to go away anytime soon.

However, the gap between the two might be eased if Kemp gets penciled in to the starting lineup. For the fifth straight day, that didn’t happen. Carl Crawford, Andre Ethier and Yasiel Puig are manning the three outfield positions against the Cincinnati Reds.

Even the usually affable Mattingly got a bit testy when pressed about Kemp’s situation.
Asked what his plan for Kemp is, Mattingly said “just really to get comfortable. He was doing early work today. I thought he looked really good, honestly. I think Davey (Lopes, the Dodgers’ first base coach) and (third base coach Lorenzo) Bundy felt the same way. It’s just a matter of him saying ‘hey I feel comfortable, I’m ready to go.’ From there we just put our guys in the lineup, how we do it.”

“We haven’t even — this is the first day he’s really had a true workout there.”

“I just gave you my answer,” Mattingly replied. “I’m not going to keep going over and over this. He tells us he’s comfortable, we’ll go from there.”

It wasn’t an attempt to stir up drama, though that’s happened before. This was merely an attempt to report the situation, and it’s clearly become a sensitive one.

To be fair, Mattingly predicted this. Since the first question in spring training about the Dodgers’ so-called “four outfielder dilemma,” the manager said that one outfielder would be unhappy every night if all four were healthy. Actually, Mattingly said this back in August of last year.

Right now Kemp is frustrated, and it’s getting harder for him to hide it by the day. For what it’s worth, Mattingly said he’s not been worried about Kemp’s attitude the last five days.

Hours after his early work under the hot afternoon sun was over, Kemp went back out to left field to shag balls during batting practice. If nothing else, he’s putting in the work. When that pays off remains to be seen.

“We don’t see the same stop and start (when Kemp plays the outfield) and rightfully so,” Mattingly said. “Basically he hasn’t hardly played in two years, had major surgery that’s probably pretty scary for him. Didn’t really play that much in spring training.

“I’m pretty confident” Kemp will regain that stop and start, Mattingly said, “but I’m not the one that has to be confident.”