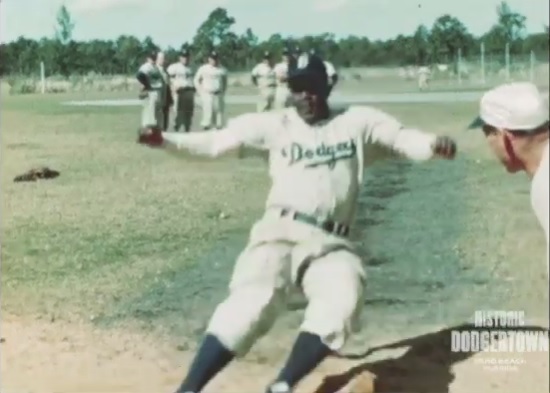 Jackie Robinson slides into a practice sliding pit during spring training in 1951. (Still image from historicdodgertown.com).

Highlights of the never-before-seen silent film show the training regimen of the Dodgers at Dodgertown. Included in the footage are Hall of Famers Jackie Robinson, Pee Wee Reese, Roy Campanella and Duke Snider. Aerial footage showcases the baseball fields, while the barracks used to house nearly 600 major and minor league players are also shown.

The players are seen training on the site that still exists for multiple sports activities. Robinson, who broke Major League Baseball’s color barrier in 1947, takes swings at field two, slides in the sawdust-filled sliding pit and practices double plays with partner Reese at shortstop. Campanella is shown during batting practice at field two. Pitcher Don Newcombe is also shown doing calisthenics at Field No. 2.

The video was acquired by Gus Steiger, a sports writer for the Brooklyn Times, the New York Morning World, the New York Journal-American, and for more than 30 years the New York Daily Mirror. His granddaughter recently transferred the film to digital format.

“We are pleased to share this rare footage in tribute to longtime New York sportswriter Gus Steiger, who had this original film and passed it along to his son, Joel,” said Peter O’Malley, Historic Dodgertown chairman. “I knew Gus and he had the respect of everyone in the Dodger organization.”

Joel Steiger, featured in the film as a boy exploring Dodgertown, said, “The original film is edited to four and a half minutes. Our family is happy that it is available for Dodger fans everywhere. I was fortunate to travel to Dodgertown as a boy on several occasions and visit this historic place. I have many great memories of it and the people there.”