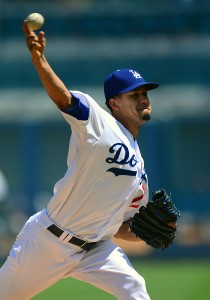 Carlos Frias, who threw six shutout innings Wednesday in his first major-league start, said he hasn’t been told what his role will be the remainder of the season.

“You’ve got to be ready for anything,” Frias said.

Mattingly confirmed that Roberto Hernandez will take his next turn in the rotation Tuesday against the San Diego Padres. After making two quality starts in his first two games with the Dodgers, Hernandez has allowed 11 runs in his last three while averaging 5 1/3 innings in each.

“Carlos, we feel like, could be very valuable for us in different areas,” Mattingly said. “He could be a guy that makes a start. He could also be a guy that helps us out of the pen. The way he’s been pitching, you can put him in different scenarios.”

“The preparation is different, you know,” he said. As a starter, “you can prepare a couple days before you get on the mound.”