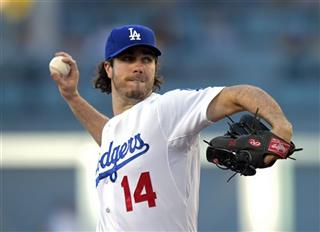 Dan Haren has exercised his $10 million player option to pitch for the Dodgers in 2015. The decision comes as no surprise, and ensures that the Dodgers’ top four starters will return barring any trades.

Haren had an up-and-down 2014 season. He stayed healthy enough to make 32 starts, which tied for the team lead. He also finished well (5-2, 2.43 earned-run average), but only after a miserable stretch in which he went 0-5 with a 10.03 ERA in five starts from July 5 to August 1. In the postseason, the Dodgers went to a three-man rotation of Clayton Kershaw, Zack Greinke and Hyun-Jin Ryu. Haren did not pitch.

Former Dodgers general manager Ned Colletti signed Haren to a one-year contract last year with a $10 million option for 2015. The option became a player option when Haren reached 180 innings pitched in his penultimate start of the season.

The 34-year-old right-hander finished the season 13-11 with a 4.02 ERA. Only six starting pitchers who qualified for the ERA title had a worse ERA-plus than Haren’s 87.

The former Pepperdine and Bishop Amat standout is 142-122 in 12 major-league seasons.