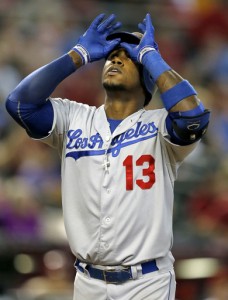 As expected, the Dodgers have extended a qualifying offer to free agent shortstop Hanley Ramirez. Ramirez has until 2 p.m. next Monday to accept the offer, which amounts to a one-year contract worth $15.3 million.

If Ramirez rejects the offer and signs with another team, the Dodgers would receive a compensatory draft pick in June 2015.

Ramirez, 30, slashed .283/.369/.448 in the final year of a six-year, $70 million contract that he signed as a member of the Miami Marlins. Though he was a steadying force on offense (132 OPS-plus), he struggled mightily on defense. His .963 fielding percentage matched Washington’s Ian Desmond for the lowest among regular National League shortstops and his -10.3 UZR was the lowest among all NL shortstops.

In the last two years, 22 free agents have received qualifying offers and none have accepted.

Though Ramirez’s nagging injuries were a constant source of concern last season, there should be a sizable market for a player with a career batting average of .300, plus power and the ability to steal a base. Ramirez could prolong his peak years by moving to the American League, where he can be a designated hitter.