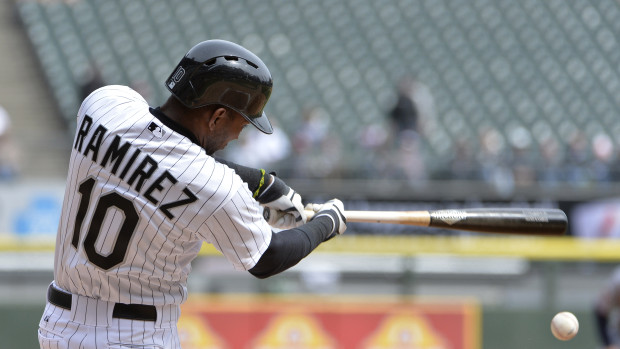 The Dodgers might have a Ramirez at shortstop next year after all.

According to a report on CBSChicago.com, the Dodgers are one of at least three teams that have inquired on White Sox shortstop Alexei Ramirez. The New York Yankees and New York Mets (“the most aggressive [team] in their pursuit of a shortstop over the past 12 months”) are also mentioned in the report.

Ramirez’s contract is considered a strong selling point for the White Sox if they do entertain a deal. He’s making a modern-day bargain of $10 million in both 2015 and 2016. The Cuban native has missed just 22 games in the last five seasons out of 810 games possible (an average of 156 played per year). Ramirez made the All-Star team for the first time in 2014, and he’s averaged 68 RBIs, 22 stolen bases and 17 errors over the last five seasons.

Ramirez rated as a slightly below average fielder this season, according to DRS and UZR, but rated higher than the incumbent Dodger shortstop, Hanley Ramirez, in both regards. He was among the better offensive shortstops in a generally weak American League crop.

Hanley Ramirez is expected to decline the Dodgers’ $15.3 million qualifying offer, which would leave a big hole in their lineup. It’s certainly plausible that the Dodgers would be kicking the tires on a veteran shortstop who could bridge the gap to Corey Seager — if they feel that Seager would be rushed into a major-league job in 2015.

Levine has mentioned Alexei Ramirez as a trade chip before, but the White Sox have apparently maintained a high asking price.