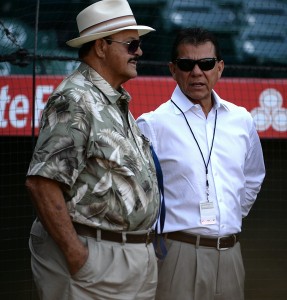 Dodgers scout Mike Brito, left, has been chosen as the International Scout of the Year for 2014. (Keith Birmingham/Staff photographer)

SAN DIEGO — Veteran scout Mike Brito, who helped the Dodgers identify and sign Fernando Valenzuela, Yasiel Puig and prospect Julio Urias, will be honored Wednesday as the International Scout of the Year at the Winter Meetings.

The award is not given annually. In fact, Brito is believed to be only the fourth person ever to win the award, joining Ralph Avila (2006), Epy Guerrero (2008) and Fred Ferreira (2012).