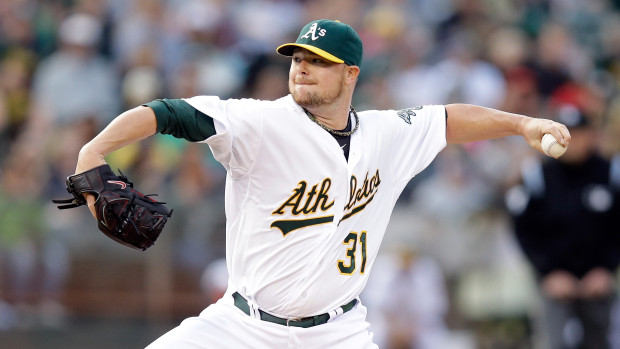 SAN DIEGO — From the beginning, the Dodgers’ reported pursuit of free agent left-hander Jon Lester did not read like an earnest attempt to upgrade their starting rotation.

As somebody smart said to me when the week began: “Why would the Dodgers bring in Andrew Friedman and Farhan Zaidi if their off-season plan centered around signing Jon Lester? Ned Colletti could have done that.” It’s a great point. Signing Lester, who is reportedly in line to make more than $150 million over the next six or seven years, simply doesn’t fit the M.O. of a sabermetrically inclined front office trying to create a more nimble roster.

Also, the beginning and the ending of this pursuit were separated by roughly a week, if not a few days. When it surfaced Tuesday that Lester had narrowed his decision to the Red Sox and Cubs, few were surprised.

But what did the Dodgers’ pursuit actually look like? Did they ever have an actual number of years and dollars they were willing to go to on Lester?

Was the Dodgers’ interest merely a rumor floated by Lester’s agent to drive the bidding up?

Was it all just a calculated ploy by the Dodgers to merely drive Lester out of the Giants’ price range?

The answer doesn’t matter, really. The story in San Diego is not that the Dodgers are out on Lester, but rather that the Giants are out too. The Dodgers won’t have to face the best pitcher on the free agent market more than twice in the regular season.

The National League West still has another year to contend with a Dodgers rotation led by Clayton Kershaw and Zack Greinke — at least six years in the case of Kershaw. (Dodgers president of baseball operations Andrew Friedman said Monday that he won’t address Greinke’s impending opt-out clause with the pitcher until after the 2015 season.)

The Padres still have a formidable rotation and the Diamondbacks and Rockies do not. The Giants still have Madison Bumgarner but they lack the 1-2 punch to compete with the Dodgers over a 162-game season, barring the unexpected reappearances of a younger Tim Lincecum or Matt Cain. As pitching is concerned, the landscape in the division should not change dramatically in 2015.

That said, Max Scherzer and James Shields are still available via free agency. So are Hiroki Kuroda and Jake Peavy. The Dodgers (and presumably the Giants) are still in the market for a starting pitcher, and some of these free agents might be in play for the NL West clubs.

The Dodgers are probably out on Scherzer for the same reasons that apply to Lester. Scherzer is reportedly seeking more than $200 million.

So we all move on, except for those with a vested interest in the Red Sox or Cubs, who are all still awake here at the Manchester Grand Hyatt.