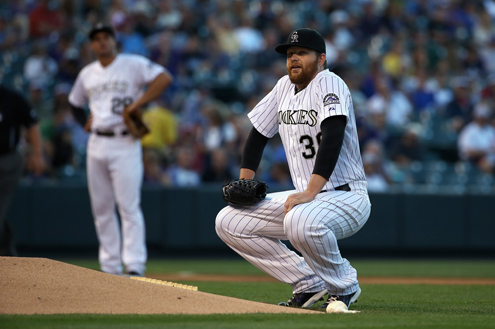 The Dodgers have agreed to terms with left-handed pitcher Brett Anderson on a contract for 2015. (Getty Images)

The Dodgers have agreed to terms with free agent left-hander Brett Anderson on a one-year contract. The deal is worth $10 million plus $4 million in incentives, according to multiple reports Monday.

The contract is unofficial because it is pending a physical. The Dodgers have not confirmed the signing.

When healthy, Anderson has been a productive major-league starter since he broke in with a strong rookie campaign for the Oakland A’s in 2009. In 92 career games (81 starts) with the A’s and Colorado Rockies, Anderson has a 3.73 career ERA. As a starter, his career ERA is 3.69.

Health will be the key to Anderson’s success with the Dodgers. He had Tommy John surgery in 2011 and had two stints on the 60-day disabled list in 2014, once with a fractured left index finger and another with a ruptured disc in his lower back. The latter injury required surgery in August.

Anderson wound up starting only eight games last season for the Rockies, finishing with a 2.91 ERA, 29 strikeouts and 13 walks. Colorado declined the $12 million team option in Anderson’s contract at the end of the season. The last three seasons combined, Anderson has only been healthy enough to make 19 major-league starts.

While that makes him a bit of a gamble, Anderson is only 26 years old — often a pitcher’s prime. And he will have plenty of support if he can’t pitch a full season as the Dodgers’ fifth starter.

Mike Bolsinger, Juan Nicasio, Joe Wieland (acquired in the pending trade for Matt Kemp) and Carlos Frias all started major-league games last season. Zach Lee is coming off his first full season in Triple-A and might be ready at some point in 2015.

His signing would give the Dodgers a potential starting rotation of three left-handed pitchers (Clayton Kershaw, Hyun-Jin Ryu and Anderson) and two right-handers (Zack Greinke and Brandon McCarthy).

Including the signing of Anderson, the Dodgers will need to clear three spots from their 40-man roster once all their pending moves become official. That includes the trades for Wieland (and Yasmani Grandal), Jimmy Rollins and the signing of McCarthy.