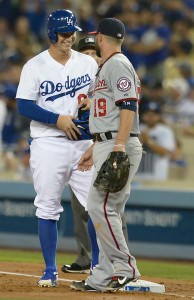 It started last November in the Dominican Republic with a bowl of soup and some fish. It might have been a side dish. Joc Pederson isn’t sure.

Whatever it was, something Pederson ate turned on him quickly. He woke up the next day feeling so bad he couldn’t play baseball, caught a flight home, and was ultimately was unable to return to the Dominican Winter League after playing just 22 games.

“I had to meet a bunch of doctor specialists down here,” Pederson said Friday at a Dodgers Community Caravan stop in Northeast Los Angeles. “They told me I can’t digest gluten or dairy so I haven’t eaten gluten or dairy since, like, Thanksgiving. It’s not really a choice. I wish it was a choice.”

Since his season ended, Pederson’s winter has been one of sacrifice. Milk, ice cream, cereal, french fries, hot dogs, candy — the list goes on.

The caravan of about 20 Dodgers players who ate lunch at City Hall on Friday were served a buffet that included flour tortillas. Pederson later suspected they weren’t gluten-free “because my stomach’s barking a little bit.”

The real question for the Dodgers: How will Pederson’s new diet affect his performance on the field? That remains to be seen, but he’ll get a big test soon enough. Manager Don Mattingly recently said that Pederson and Andre Ethier will be part of a competition for the starting center field job in spring training.

“I feel better than I did before,” Pederson said. “I’m picking (strength coach) Brandon McDaniel and (farm director) Gabe Kapler’s head about what I can eat, what are good pregame meals that are gluten- and dairy-free. Breakfast, pre-workout — it’s all new to me. I’m trying to learn as much as I can about it.”